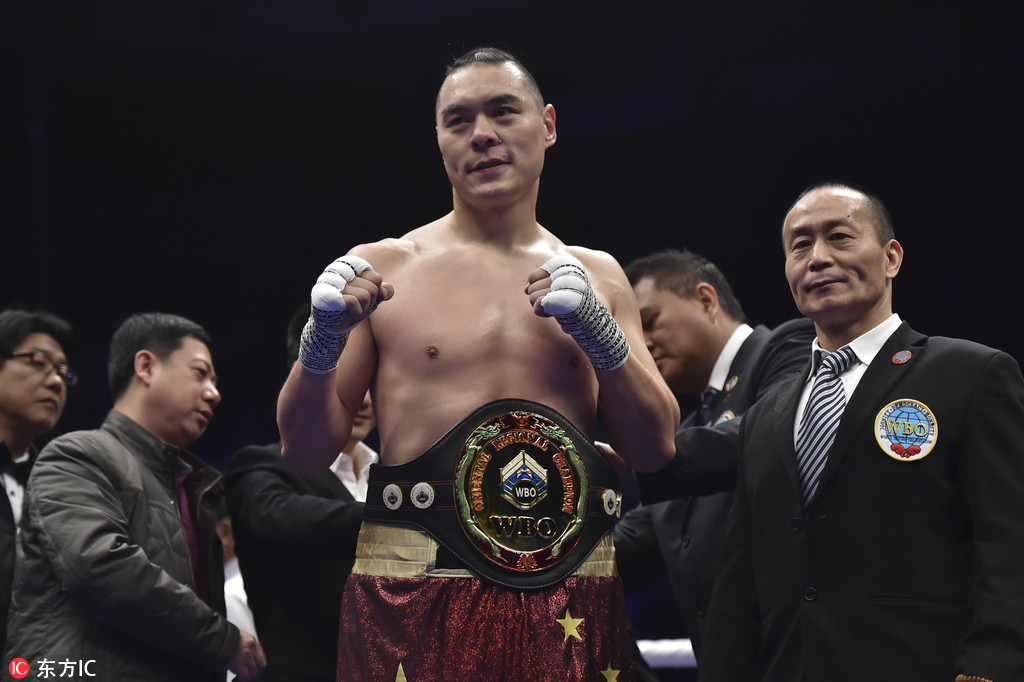 Zhang Zhilei is aiming to punch higher than ever to earn a shot at the world heavyweight championship.

For the first time in his professional career, the 6-foot-6, 260-pound southpaw from Zhoukou, Henan province, will face an opponent who can look down at him when he defends his WBO Oriental title in a 10-rounder against 6-foot-8, 280-pound Alexander Ustinov of Russia on Nov 24 in Monaco.

The 35-year-old Zhang, who won a silver medal for China at the 2008 Beijing Olympics, extended his perfect record to 20-0 and notched his 16th knockout with a third-round stoppage of American Donald Haynesworth last month in Changsha, Hunan province.

Ustinov, 41, owns a record of 34-2, with 25 KOs. His last outing was a distance loss to Germany’s Manuel Charr for the then vacant World Boxing Association title 11 months ago.

With Zhang currently ranked No 6 by the WBO and Ustinov No 9 by the WBA, the winner of their bout will be squarely in the mix to challenge either WBC champ Deontay Wilder of the US or Britain’s Anthony Joshua, who owns the WBA, IBF and IBO belts.

Wilder is set to defend his crown against Britain’s Tyson Fury on Dec 1 in Los Angeles.

Joshua defeated Zhang 11-5 in the quarterfinals at the 2012 London Olympics, but before the Chinese slugger known as “The Big Bang” can start dreaming of a rematch, he has to get past the massive Ustinov.

“This is a big step up in competition for Zhang and if he does what we expect him to do on Nov 24, he will definitely be in line to fight for the world title in 2019 and make history as China’s first pro heavyweight champion,” said New Jersey-based Dino Duva, who promotes Zhang for Roc Nation Sports.

Ustinov, a former kickboxing world champion, switched to regular boxing in 2005, at age 29. He reeled off eight straight KOs en route to winning the European Boxing Federation championship in 2009 and was unbeaten in 28 consecutive bouts before being KO’d by Bulgaria’s top-10 ranked Kubrat Pulev.

Ustinov’s biggest win was a decision over former world No 3 David Tua in 2013, after which Tua announced his retirement. Ten months later the Russian was scheduled to fight Fury as a late replacement for the injured Dereck Chisora, but Fury pulled out of the bout due to illness.

While Ustinov holds a wide edge over Zhang in pro rounds – 181 to 45 – the Chinese slugger has the better KO percentage, 80 to 69. Ustinov has been 12 rounds three times and has been past round 9 five times. Zhang’s longest fight has been six rounds (twice).

“He’s a sponge,” George said of his prize pupil in a recent interview with ringtv.com. “What it comes down to is being mentally prepared, and Zhang shows that every day in the gym with his willingness to learn. If there’s something he doesn’t understand, he keeps working on it.

“He lost to Joshua at the Olympics, but he’s a much different fighter today – a real hungry, aggressive, smart fighter. He’s ready right now. Give me any of the top five contenders in the world, and Zhang beats them all.”

Should Zhang score a convincing win in Monaco and move closer to challenging Wilder or Joshua, a likely strategy in the interim would be a defense of his WBO Oriental title against Japan’s 32-year-old Kyotaro Fujimoto, who is 20-1 with 12 KOs.

The WBO rankings for October list Zhang at No 6 and Fujimoto at No 7, marking the first time two Asian heavyweights are among the world’s top 10. And such a fight would greatly expand both fighters’ global profile.

“I have a very big hope that the whole world is going to see me, and everyone’s eyes are going to focus on me,” Zhang told ringtv.com. “I am a giant man from China!”