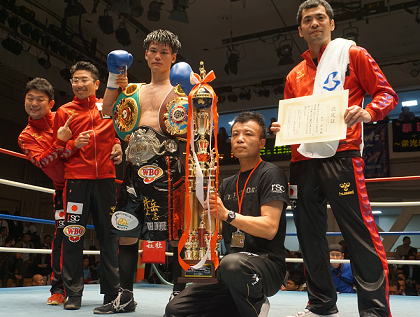 At world level it’s very rare to see titles unified, but below world level it does seem like we’re seeing titles unified on a pretty regular basis, with a number of fighters holding multiples titles on the Asian regional scene. The latest fighter to unify titles is unbeaten Japanese Light Middleweight Takeshi Inoue (12-0-1, 7) [井上 岳志].

At the start of the day Inoue was the Japanese champion, who was challenging his OPBF counter-part Ratchasi Sithsaithong (9-4, 7), with the WBO Asia Pacific title also up for grabs for the winner.

Coming in to the bout Ratchasi has been in great form, winning the OPBF title earlier this year in Japan and making his first defense on Japanese soil. Today however he was shown to be second best.

Inoue took the fight to the Thai early on, pressing behind a high guard and forcing Ratchasi to try and fight him off. As the Thai tried to back up Inoue the Japanese fighter let his shots go, and it was clear that the local favourite had the edge in power, speed and skills. Those traits of Inoue began to take their toll in round 2 and he continued to build on his success, to take a lead on the cards after 4 rounds, with scores of 40-36, twice, and 39-37.

In the middle rounds Inoue pressed the action more, and he landed some really nasty shots up top on Ratchasi, who was showing his toughness by really giving every thing he had. The Thai tried to come back but was never able to get Inoue’s respect, and in round 8 Inoue’s power finally broke through, with a body body shot dropping the Thai.

A second knockdown by Inoue, again from a body shot, finished off the Thai.

With the win Inoue becomes a triple crown champion, and after the bout he stated he would like a world title fight, if he can get one, in the future. For Ratchasi there was no excure, just an acceptance that Inoue’s stance left him with little target area, and he had no answers for Inoue’s low stance and high guard.