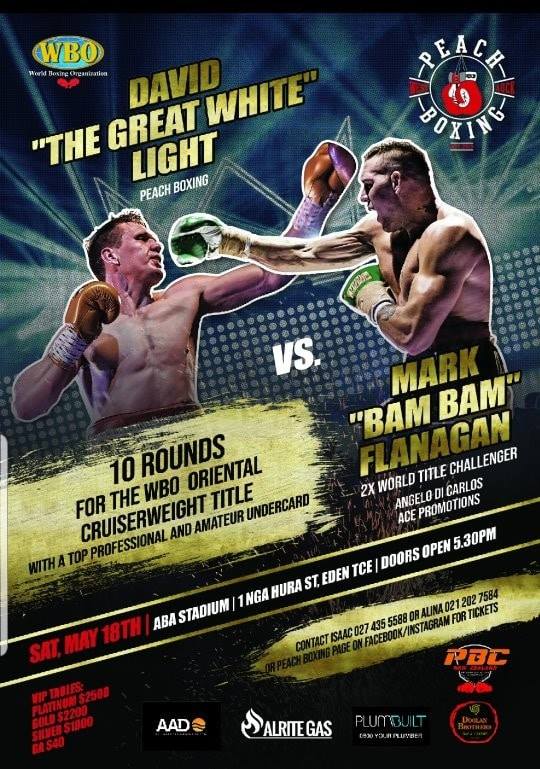 New Zealand Jr. Heavyweight David Light (12-0) is scheduled for a trans-Tasman clash this weekend that will be the most important fight of his career to-date.

Light will face Australia’s Mark “Bam Bam “Flanagan (24-6-0) on Saturday, 18 May at Auckland’s ABA Stadium in a ten-round clash for the WBO Oriental Jr. Heavyweight Title.

The two men will not only be competing for a belt. The winner of Saturday’s contest will earn themselves a coveted spot in the top 15 of the WBO Jr. Heavyweight rankings, putting the winner within striking distance of a world title shot.

Light started this year with a win in March against Jordan Mororoa. Since then he has focused all of his attention on the hard-hitting Flanagan.

“It’s been real good, my last fight was ten weeks ago, we went straight into it, that was sort of the beginning of the camp [that]last fight, that guy [Mororoa] gave me a good run for my money.

“We did not expect him to go the rounds but he went six rounds, perfect start really, hard battle up front,” Light said to Newsie.

“We have been sparring over in Aussie and just doing everything we can. I am in the fittest shape of my life.”

When Light talks about being in the best physical shape of his life, he is not just throwing out idle chit-chat. The 27-year-old, who trains out of West Auckland’s Peach Boxing, looks noticeably bigger and more defined than the last time he stepped into the ring; the results of a carefully planned out diet and training routine.

“We have really cracked down on everything and just meticulously gone through everything. I sat down with the strength and conditioning coach, boxing coach and manager and we just worked out everything. We wanted to get right [we] put it on spreadsheets, made sure I hit my targets and we got the results.

“It was more just being organised, it’s easy to say just eat right and do all this stuff but what you are supposed to be eating can be a mystery.” Light said.

On Saturday Light will be facing a fighter who has shared the ring with some of the world’s top cruiserweights. Two years ago, Flanagan fell short of capturing the WBA Super World Cruiserweight Title when he lost via points to the former unified cruiserweight world champion Denis Lebedev.

“I have a good idea of what he can do. He is obviously a strong puncher and he puts his combinations together well, he has a really good overhand right,” Light said.

“If he did not have some dangerous points we would not be so excited about this fight. He has got all of Australia, behind him.

“ I sort of have been fighting only local guys, so that’s more of what plays into it, you have a lot of guys who don’t know me in Australia and obviously that is a much bigger place but people sort of counted me out against [Lance] Bryant but I am pretty confident in my abilities now.”

Flanagan is well respected in Australian boxing circles and the bout will be screened live in Australia on Epicentre tv while in New Zealand it will be shown on Sky Sports 4.

Saturday’s contest is shaping up to be one of the biggest fights in New Zealand this year and as Light himself says “no one is coming to collect a pay check.”

The pair’s combined total of knockouts is 25 and all signs point to this fight being a bruising encounter between two of the best cruiserweights in Australasia.

Since turning professional, Light has overcome every obstacle presented to him. However, Flanagan will test him in ways he has not been tested before. If Light can overcome this latest challenge, he will be rewarded with the opportunity to square off against the very best in his division.