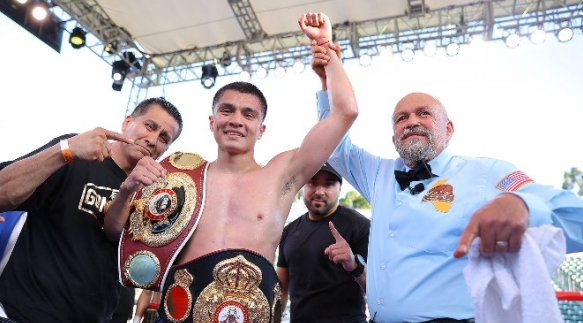 The fight took place on Saturday night at the Dignity Health Sports Park in Carson, California, and streamed live on DAZN.

“I saw by the second or third round that he was already gassed,” said Gonzalez. “I knew he was ready to go by the middle rounds, so I tried to take him out like I said I would. I work hard every day in the gym, all I do is eat and sleep boxing, so when I say I’m going to do something, I mean it.”

Gonzalez applied pressure throughout the fight and cut off the ring when needed, which helped him capture the WBO Global Featherweight title. In the fifth round, Gonzalez dropped Avila as time ran out.

“It was time to go,” said Gonzalez. “I could tell that by the second or third round. He was gassed. I knew he wouldn’t be able to box long.”

Avila suffered his first career loss back in May of 2017 versus Joseph Diaz on the Canelo Alvarez vs. Julio Cesar Chavez Jr. undercard. Gonzalez continued to punish Avila in the sixth round before his corner threw in the towel.

“I could tell by the second or third round, he was gassed, said Gonzalez. “I knew he wouldn’t be able to box to long, and I got him out in the sixth round.” Gonzalez called out any champion at 126 pounds to fight him. “Everybody is running their mouth,” said Gonzalez. “All I do is box, all they do is run their mouth on social media.”