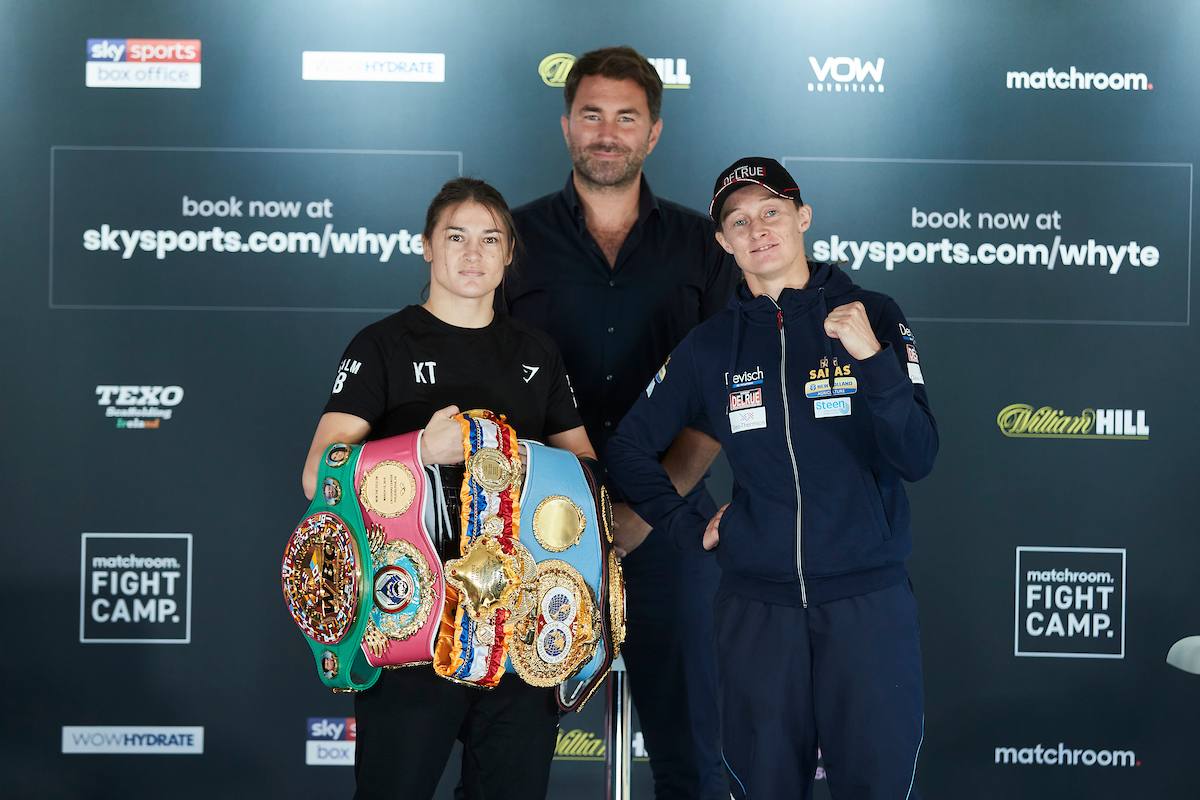 Katie Taylor – Bray, Ireland – 15-0, 6 KOs – will be defending her Undisputed WBO Lightweight World Title in a rematch against Delfine Persoon on Saturday at Matchroom Fight Camp action in Brentwood, Essex, live on Sky Sports Box Office in the UK and DAZN in the US, as part of Whyte-Povetkin:

“I’m very very excited. I’ve said it before, this is why I’m in the sport of boxing, to be involved in fights like this. This is a legacy building fight for me and Delfine. We’re both in this sport to prove that we are the best. You have two fighters here that absolutely believe that they are going to win. We both think we’re going to win. That’s what makes this such a fantastic fight. I want to be involved in the biggest fights and that’s why I wanted this rematch. I want to prove that I am the best. There will be criticism whether I win or lose. This is why I’m in boxing – to be the best. I want to be known as the pound for pound No 1. No crowd, all the belts on the line? This is the purest form of boxing you will ever see. I’m prepared for whatever comes my way on Saturday. May the best boxer win. “It’s up to me to prove that I also deserve the Titles. In New York, for us, it was not the correct decision. Everybody thinks [I won the first fight with Taylor]. It’s good there is a rematch. We will see who is the best fighter. We didn’t think [Taylor would grant a rematch]. We were very surprised Katie is taking this risk. For her, it is a big risk. If she loses, it isn’t good for her career.

“A war? This is boxing. Punch, punch back. It is not a war. Grabbing and holding is not boxing. Boxing offensively, jabbing and working, is the way to box. I respect her style. I must prove my style, like I did in New York, but even better. But I like to box in front. Boxing with my heart can be a problem, sometimes I forget to use my [brain]. I must not give her time to hold me. Don’t give her the time. “I could see I am bigger than her. I have to start the fight faster than last time, with a higher tempo. But I can’t change the whole thing. My way of boxing is with pressure. I can box also on the back foot but, a lot of the time, my opponents don’t pressure me. But I can+ do it. I spar with guys in Belgium who are stronger than me. They give me problems and I find solutions. Against a girl, I always feel stronger because I train with men. “He’s probably quite powerful, I guess. I don’t know. We’ll see. I know Chris is a good boxer and everyone rates him and everything. I’m interested to test myself and see it it’s really real. He has the reputation and the clout. That’s what I want. Chris Kongo is saying he’s going to knock me out and I’m saying okay, come with it. I haven’t been to the well yet. I feel like I’ve been cruising. If he wants to take me there then I’m interested. If he’s the man to take me there I look forward to it. I want to dig deep and see what I’ve got in me too. I’m maybe too chilled right now. I don’t feel the pressure now but maybe I will on the night. I’m just ready to go.”

Chris Kongo – Bermonsdey, England – 11-0, 6 KOs – challenging Luther Clay for the WBO Global Welterweight Title:
“I just want to thank you (Eddie Hearn) and Dillian Whyte for getting me on this platform. I believe this is my time to shine, to show what everyone has been talking about. I’m ready and raring to go. This fight won’t last. Someone is going down and I’m sure it ain’t me. I’m going to go in there and be the usual Chris Kongo. When I’m myself, everything just flows naturally in the ring. When I’m thinking, I make sure I listen to my coaches in the corner. That’s the main thing for me. I see him as a quality opponent. He’s got a few good fundamentals. On the night, I believe he is very limited in certain things he does. I don’t think he has any type of good fishing quality that you need as an elite fighter Speed kills. When I show my speed, everything will come off. You will see him on the floor, guaranteed. I don’t think I’ll let this go the distance. Everyone I’ve ever had hurt in a fight, they’ve never seen the last bell.”