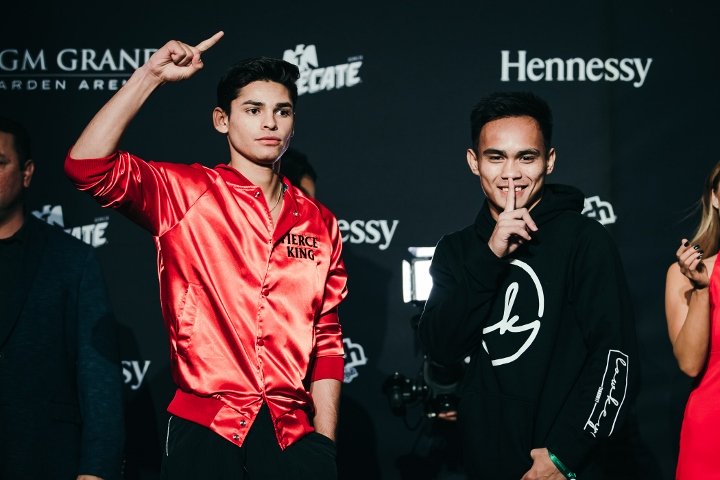 21-year-old lightweight prospect Ryan Garcia is set for action on Saturday, headlining the Canelo-Kovalev undercard in the night’s co-feature on DAZN, facing Filipino battler Romero Duno in a fight that may or may not wind up competitive, but will almost certainly be an entertaining watch for fans.

The fight has come about in a pretty unusual and fairly high-profile manner, considering that this is not exactly an elite-level matchup. Garcia was supposed to return to the ring in September against Avery Sparrow, who wound up arrested the day before the bout and was, obviously, pulled from the fight.

Duno, who was on the same card, was offered to Garcia as a short-notice replacement opponent, but Garcia and Golden Boy couldn’t come to terms on that, resulting in a very public and pretty ugly spat between fighter and promoter.

In the end, cooler heads prevailed, with Garcia signing an extension with Golden Boy and moving forward to the Duno fight on this date, a big opportunity on a major card.

On Duno’s end, he didn’t have any trash to talk about Garcia “ducking” him in September.

“I respect the decision because I know that King Ryan had already prepared for a different opponent, and that’s why he didn’t accept the offer,” Duno said on Tuesday.

Garcia was very brief in his discussion of the fight and any “controversy” surrounding it not happening a couple of months ago.

“I’m here now, I’m ready to do my thing Saturday night and prove that I’m the better fighter,” he said. “Words are cheap, I’m just ready to show what I can do.”

Duno is also fully aware that he’s the underdog, and that it’s believed that Garcia’s speed and skills will be too much for him, but he believes in himself, saying, “A lot of people said that King Ryan is going to beat you, but I said to myself that maybe I can have a technique to counter that kind of speed.”

Outside of Garcia’s huge social media presence — which he’s right about when he says that everyone but him seems to bring it up — he has a lot of naysayers and non-believers who feel he’s nothing more than an Instagram success who can’t back it up in the ring.

If he wins Saturday, he doesn’t sound like he expects anything to change there, at least not yet, and he’s not too concerned about it.

“I don’t know what it says to them, that’s up to their own judgment,” he said. “I believe in myself and my team believes in me and that’s all that matters. This is a big moment and a big time in my life.”