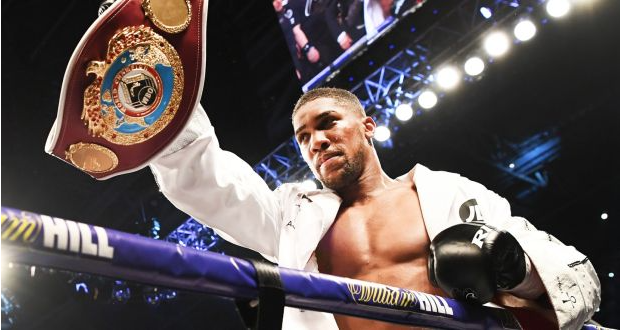 ANTHONY JOSHUA WKO9 (2:58) v KUBRAT PULEV
Anthony Joshua dominated and then floored mandatory challenger Kubrat Pulev to score a ninth-round knockout and retain his IBF, WBA, WBO & IBO Heavyweight World Titles at The SSE Arena, Wembley on Saturday, live on Sky Sports Box Office in the UK and Ireland and on DAZN in the U.S. and more than 200 countries and territories on its just-launched Global platform.

With 1,000 ticket-buying fans allowed into the building for the first time at a British fight since the COVID-19 pandemic began, Joshua’s entrance was met by a huge roar from the crowd.

Joshua floored Pulev heavily on three occasions, twice in the final round, and ended the fight with a vicious right hand. The explosive performance from Joshua would have demanded the attention of WBC ruler Tyson Fury – they remain on a collision course to decide an Undisputed Champion in 2021.

Joshua told Sky Sports afterwards: “I started this game in 2013. I’ve been chasing all the belts. I’ve been dealing with mandatories.
“Of course I want the challenge. It’s not about the opponent, it’s about the legacy and the belt. Whoever has got the belt, I would love to compete with them. If that is Tyson Fury, let it be Tyson Fury. It’s no big deal.

“It’s one fight at a time, picking them off one by one. That’s all it’s about for me. I’ve got to stay focused.”

“There’s been a lot of talk,” Eddie Hearn told Sky Sports. “As he said, it’s less talk, more action. Since he came into the office, he wanted to be the Undisputed Champion of the World.

Anthony Joshua was on another level tonight 😤

The unbeaten 27-year-old was denied a fight for the vacant WBO belt after Krzysztof Glowacki tested positive for COVID-19 last week, but Okolie made short work of his Polish replacement opponent.

The explosive power in Okolie’s fists was evident in the opening minute as he rattled in a right hand before a body shot sent Jezewski to his knees. A straight right hand then sent shockwaves through Jezewski’s legs as he tumbled back to the canvas. Okolie would not be denied a quick finish and a right hand sent Jezewski tumbling backwards for a third and final time in the second round.

Speaking to Matchroom afterwards Okolie said: “I’m really happy. I was in the back room thinking I’m really calm and chilled. I just went out there to try and execute what I do every day in the gym. I really came out of the cage. I’m happy to get the win. I’ll have to watch it back, but from the reaction ringside, it seems like it was good. It’s what we’ve been working on. I do it every day in training. It’s about taking it from training to the fight. If I’m able to do what I’m doing in training in my next fight, I’ll be a World Champion. I’m excited.

“He was undefeated and he was in shape preparing to fight. It was a risk, he had the world at this feet. It felt like a normal show, even with everyone spread out. It felt good. I’m really excited to watch it all back. That’s five stoppages on the trot. I’m feeling good and I want to keep the KO run going. It was good to shake out and make the weight. I had a good training camp and we’ll just build off that for the next one.”

Lawrence Okolie gets the stoppage in Round 2 💪 pic.twitter.com/G1A3hYKXOy