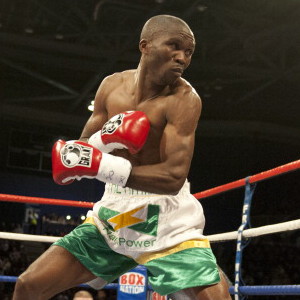 Namibia’s Paulus Moses, a former WBO lightweight champion, retained his WBO Africa lightweight title when he stopped the gutsy Crispine Moliati from Malawi in the seventh round at the Ramatex Hall in Windhoek, Namibia on Saturday night.

Moses’ original opponent Benoit Vela from the DRC was withdrawn at the last minute after failing a medical test. Promoter Nestor Tobias then brought in Moliati, who used his jab from the opening round and stood toe-to-toe with Moses through the first six rounds.

However, the more experienced Moses, 38, proved too good for the Malawian, piling up the points with his educated left jab and in the seventh round he dropped Moliati, 27, with a right hook.

He managed to beat the count but was in no condition to continue as the referee waved the fight off at 40 seconds into the round.

In a night of WBO title fights Siboniso Ngonya from South Africa outpointed Immanuel Naidjala of Namibia over 12 rounds to claim the WBO Intercontinental lightweight title. The scores were 116-109, 115-110 and 113-112.

Walter Kautondowka retained his WBO Africa middleweight title when he stopped Med Sebyala from Uganda in the tenth round.