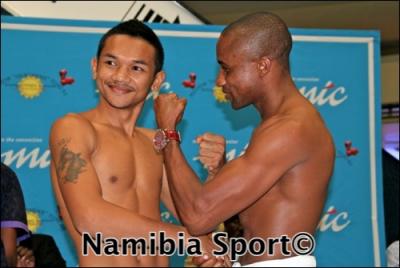 After months of hard work and preparation Paulus Ambunda will finally get his chance to become a world champion when he challenges Pungluang Sor Singyu of Thailand for the WBO bantamweight title at the Ramatex hall on Saturday night.

Ambunda is in the best shape of his life, but he will face an opponent with an impressive record and who is highly rated by boxing experts throughout the world.

For a 24-year-old boxer, Pungluang has certainly compiled an impressive record since he turned pro as a 16 year old in 2004.

He won his first 10 fights, of which seven were by knockout before he won his first international title, the WBC Youth World Bantamweight title in 2006.

He defended that title on five occasions while improving his pro record to 23 straight wins before he relinquished the title after losing on a split decision to Stephane Jamoye of Belgium in 2009.

According to his promoter Pariyakorn Ratanasuban that was a highly controversial decision as the bloodied Jamoye came the worst off from that fight.

His big moment came on 20 October last year when he beat AJ Banal of the Philippines on a ninth round TKO to win the vacant WBO bantamweight title.

Ambunda only has 19 fights to his name and is also older at 32, but he is not known as “The Rock” for nothing.

He turned pro in 2007 and soon made an impact with his powerful punches, winning five of his first 10 fights on knock outs.

In April 2010 he won the WBO Africa Bantamweight title and went on to defend it on five occasions, beating some highly rated South African opponents like Klaas Mbonyane, Bongani Mahlangu and Cleutus Mbhele along the way.

In July last year Ambunda comfortably beat William Prado of Brazil on a unanimous points decision to capture the vacant WBO International title and in October he finally got his crack at the world title when he was installed as the mandatory challenger to Pungluang’s title.

With two big punchers in the ring, the chances of a knockout will be quite good and both boxers are confident that they will be victorious.