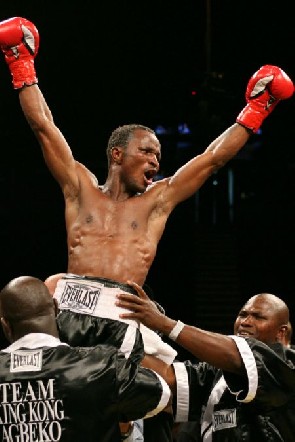 The deal, struck last week in the United States, has almost guaranteed the “Fresh King” a date with WBA and WBO super-bantamweight champion, Guillermo Rigondeaux, for a potential unification bout.

“So far, to my knowledge, I can confirm that the fight is almost done right now. My manager is still negotiating and I believe he is going to get me the right fights,” Agbeko said after signing the deal.

“I fought a few fighters who were managed by Espinoza, and I admire how he treats his boxers. He has a very good reputation, and he is one of the most influential managers in the boxing world right now I’m proud to be part of Espinoza Boxing,” he added.

If the fight materialises, it will confirm Agbeko’s upward movement from the bantamweight division where he still holds the World Boxing Organisation (WBO) title.

It signifies an escape route to some financial satisfaction from Frank Espinoza, Agbeko having broken up with the famed Don King Promotions sometime last year.

“I feel like I am born again, I feel like am just starting my career. The most important feeling I have right now is that I have the hunger that I had in me when I turned professional.

“I feel like I am beginning my career and I can’t wait to get back into the ring to win a world title at the super-bantamweight (division),” he stated.

Agbeko, who ruled the bantamweight class under the International Boxing Federation (IBF), has endured difficult times recently, including a controversial loss to Abner Mares.

“I just want to thank God for what I’ve passed through this few years. I thank Him for all that He has given me and all that He has taken away from me. He has prepared my heart for the future and I will make good use of that lesson,” he said.