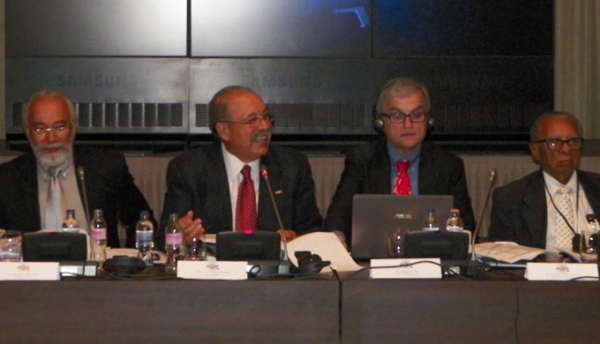 Story and photos by David Finger

The 26th Annual WBO Congress officially kicked off Tuesday morning at the InterContinental Hotel in downtown Budapest as boxing insiders from around the world came to celebrate some of the exciting developments in the World Boxing Organization in 2013. The event kicked off with roll call, followed by an invocation. After approving the prior minutes from the 2012 Convention, the congress moved forward with the regional Vice President’s reports. Starting off was Vice President Mark Reels, who did reports from the NABO and the WBO Intercontinental. Although the NABO and the WBO Intercontinental both saw a slight drop in activity it still was a productive and profitable year for the regional organizations.

The NABO held an impressive 12 championship fights (with revenue of $46,760) while the Intercontinental held 20 championship fights (with a revenue of $68,560). Reels also discussed the success of the WBO in developing world class fighters. Reels discussed how the NABO has seen 54 of the 262 fighters who fought for the belt subsequently fight for the WBO title. Although Reels downplayed the statistic, expressing a desire to see that number rise, it nonetheless impressed many at the table, with President Francisco “Paco” Valcarcel calling it “impressive.”

“Our issue is with quality over quantity,” Reels said during his presentation, “we have criteria for a fighter who is able to fight for a title.” Reels, however, did want to see some leniency on the issue of fighters getting sanctioned for NABO and WBO InterContinental fights, noting some good fighters who technically fell short of the high standards set by the WBO in regards to qualifications. President Valcarcel expressed concern over the idea.

Still, with all 15 NABO championship fights since last year’s convention being televised by a major TV network, Reels had an impressive year by nearly any standard. “As far as activity levels go, it is low,” Reels added, “but we really are recognized the world over.” Reels then discussed the revenue of the Intercontinental, confirming that the WBO Intercontinental collected over $40,000 of the $68,560 income in 2013.

From there a short video on the WBO’s widely successful WBO Kids Drug Free program was shown.

Next was Andrew Smalle’s WBO Africa regional report. Smalle admitted it was a slow year, with 7 WBO Africa fights since the last convention. From November of 2012 to December of 2012 there were three title fights, with revenue of $5,050. From January of 2013 to August of 2013 there were 4 WBO Africa title fights with revenue of $4,800. However, Smalle confirmed that additional income was expected as some sponsorship allocation was expected to kick in before the end of the year. Smalle also commented on the WBO’s commitment to high standards for the quality of the fighters who compete for the WBO African belt. Smalle’s commitment to the highest standards for WBO title fights has resulted in a lower number of championship fights, but also of a growing reputation in the continent.

“It’s been a challenge but I don’t see it as a negative at all,” Smalle admitted, “it can only go up from where it’s at now. We are a young organization, and one of our proudest moments was one of our fighters winning a championship earlier this year.” Smalle noted that despite the low activity, the WBO Africa’s high standard has resulted in it being the only regional African organization that has seen all of its champions ranked in the world rankings after winning a regional belt.

Next came Leon Panoncillo’s report from WBO Asia. Similar to the other organizations WBO Asia saw a slight decline in revenue, but it has continued its commitment to quality. Since the last convention the Asia-Pacific held 14 championship fights, raising $27,700. Panoncillo also anticipated holding 10 more fights before the end of the year. The WBO Oriental title had 5 fights, with 8 more planned for the end f other year. The WBO Asia Pacific Youth title had three title fights, raising $3,750. Although Panoncillo admitted that the Youth title has “not taken off” he was optimistic that a major Filipino television network was interested in partnering up with the WBO Asia-Pacific to award a youth belt to the winner of a “Contender” like reality series involving young prizefighters in the Philippines. Panoncillo’s biggest coup came with the exciting developments of his newest title: the WBO International championship. In just one year the WBO International title has become a highly prestigious belt, with Manny Pacquiao and Brandon Rios fighting for the vacant belt in Macao on November 24th. Panoncillo confirmed that the WBO has custom made a new belt for the winner of that fight.

The next report came from Zhang Tao on the China Zone. Although the WBO China Zone held only 7 fight shows, the WBO is still making headway into the world’s largest market, and Tao informed the board that he looked forward to hosting the WBO in China. Joe Hernandez then spoke of the Cuban boxing scene, and his desire that the situation in Cuba would soon open up. “When it (Cuba) does come free, the WBO will be at the forefront.”

Markus Aslani followed with his report on female boxing in the WBO. He proudly announced that the WBO had a good year, with an emphasis on quality in regards to female championship fights.

“We have good working relations and we want to see how we can continue this in the future,” President Valcarcel said.

A discussion from representatives from the Japan Boxing Commission followed, which was a clear sign of the WBO’s success in breaking into a new market. At the last congress in Budapest in 2009 there was a controversy over the WBO’s inability to operate in Japan. The growth in Japan since then was a clear victory for the WBO as it moved forward in Japan.

Next came the legal report, in which the WBO legal representatives discussed several pending legal issues. Several issues regarding trademark registration was discussed, with several brands extended into 2018. They then followed up with a discussion on the recent litigation in Puerto Rico. Some confusion emerged in 2012 in regards to the administrative level, with the Puerto Rican Department of treasury moving forward with legal action against the WBO in regards to its tax exempt status.

“It’s confusion over what we actually do,” one of the legal advisors for the WBO said, “It’s a lack of knowledge of the working issues of the organization.” Although the WBO is confident that they will prevail, several members understood that even if they do not prevail in litigation, it will have little major impact on the WBO. If there is an issue we will simply change the way we disperse funds,” one legal advisor of the WBO said.

Rounding off Day One, WBO President Francisco “Paco” Valcarcel gave a special shout out to WBO Asia Vice President Leon Panoncillo over the impressive developments in Macao and the Philippines.

“We control Asia from A to Z,” Valcarcel said, “everything that occurring Asia is very important to us.”