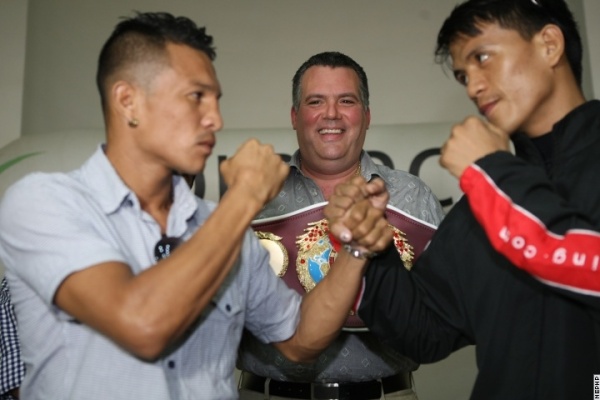 However, ALA Promotions president Michael Aldeguer told the Manila Standard that while Sabillo may not be as skilled as some of the other ALA fighters and it will be a new experience since this will be Sabillo’s first fight abroad after a long and tiring flight from Cebu,  “he has guts and is all heart” and they are hoping it will help him win and possibly set up a title fight against reigning champion Moises Fuentes who last Saturday dropped a majority draw decision to light flyweight champion Donnie Nietes in a close and exciting title bout.

In a pre-fight news conference de la Rosa who is ranked No.1 said “I am the champion without a belt” claiming that he felt he defeated Raul “Rayito” Garcia on October 30, 2010 when he lost by a twelve round split decision “but the judges didn’t see it my way.”

Learning from that experience the Colombian fighter who has a record of 21-1-1 with 12 knockouts said “this time I will stop Sabillo and won’t leave it in the judges hands.”

De la Rosa is coming off a 6th round unanimous decision over Jeyson Cervantes last July 6.

Sabillo, a southpaw nicknamed “Tiger” is ranked No.2 by the WBO and has an unbeaten  record of 20-0 with 10 knockouts.

The 29 year old is the reigning Oriental Pacific Boxing Federation champion having won the vacant title with a twelve round unanimous decision over Rodel Tejares on October 8, 2011. He is coming off a win over Rollen Del Castillo who retired at the end of the first round of a scheduled ten round bout last December 15.

Meantime, WBO president Francisco “Paco” Valcarcel announced that the fight supervisor will be Felix Diaz of Colombia while the referee for the interim title fight will be Genaro “Gino” Rodriguez of Puerto Rico while the judges are Ignacio Robles of Panama and Glenn Feldman and Michael Pernick from the United States.