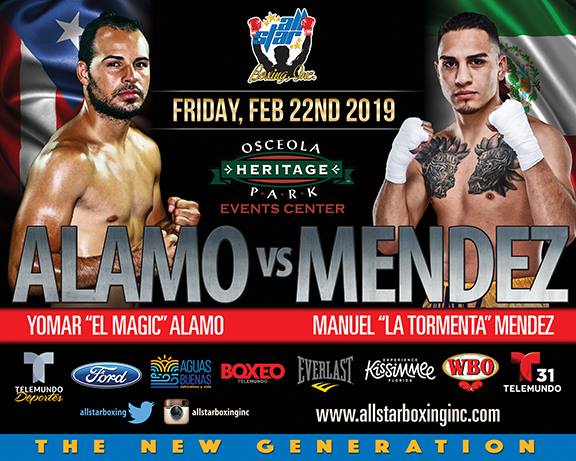 The popular series Boxeo TELEMUNDO Ford will kick off its 2019 spring season this Friday, February 22 at the Osceola Heritage Park Events Center in Kissimmee, Florida. The longest running Boxing series on US Spanish television its also celebrating its 30thAnniversary.

In the main event unbeaten prospect Yomar “The Magic” Alamo of Aguas Buenas, Puerto Rico will put his undefeated record on the line against rugged contender Manuel “La Tormenta” Mendez of Los Angeles, California in a bout schedule for 10 rounds for the vacant World Boxing Organization NABO Jr. Welterweight championship.

Alamo, 23, has won the WBC Youth and FECARBOX Titles in his young career and in his last fight he knocked out Wilfrido Buelvas in 4 rounds last July 25 on the ESPN undercard of the Masayuki Ito-Christopher Diaz before a sold out crowd in Kissimmee and improved his record to 15-0-12 KO’s. Mendez, 28, has beaten 6 undefeated fighters and in his last outing he lost a highly disputed majority decision to Robert Garcia’s protégé undefeated Jonathan Navarro and his record fell to 16-4-3-11 KO’s.

2 more bouts are schedule, first bell at 8:00 PM. Tickets are already on sale at www.ticketmaster.comorwww.ohpark.com. All Star Boxing, Inc in association with Telemundo Deportes and Experience Kissimmee is presenting the show. The Vargas-Baez fight is in association with Top Rank Boxing. Main event will be televised live on Telemundo at 11:35 PM.