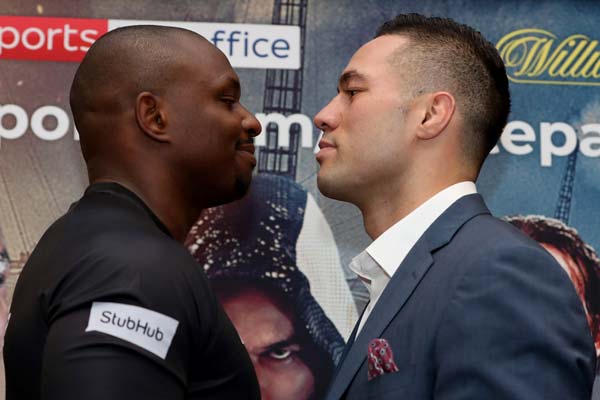 Below are quotes from the final Dillian Whyte vs. Joseph Parker press conference ahead of Saturday night’s action at The O2 in London, shown live on Sky Sports Box Office.

Dillian Whyte: “Joseph is a fighting man, that’s his heritage, but he’s short of options. He could have gone to USA to fight Bryant Jennings for a small purse and no attention or come to the UK in front of a sell-out crowd and get better pay and a more prestigious fight. He’s motivated – he knows beating me gets him close to another shot at AJ, so that’s what makes him dangerous: “if I do Dillian, I’m back in the big time again” – but he’s got to get past me first.

Joseph Parker: “It was important to get back in the ring in another big fight straight away. Dillian is on the cusp of fighting for a world title and beating him would put me right back at that top table. There won’t be any excuses from me. I’m here to do damage and I’m here to punch with bad intentions. I’m going to break him down and he’s going to take a lot of punches. He’s been talking a lot of smack in the build up and I believe that is a sign of self doubt. I hope he’s ready to take a lot of punches because I’m going to give it to him real bad. He thinks I can’t go to war, let’s wait and see.”

Promoter Eddie Hearn: “Dillian could easily have sat back and waited for his shot at WBC king Deontay Wilder, but the Brixton man is not one to wait patiently in line – this is a real 50-50 contest and I’ve no doubt that the winner will be in world title action very soon.”

Carlos Takam: “I’m very glad to be back here in the UK. When I was offered the fight against Dereck I immediately accepted it. Dereck is as tough as they come and I’m prepared for a tough night.”

Dereck Chisora: “Carlos took AJ rounds, he’s a tough guy so this is no walk in the park – it’s a marathon. He goes rounds with good fighters so I know that I’ve got 12 rounds ahead of me. They asked for this at the beginning of the year but there was no right slot for it at that time. I know it’s going to be a long night, there’s no two ways about it. I didn’t learn anything from his AJ fight as he was fighting a different game than he’ll bring tonight, I just want him to be in front of me so we can have a good time.