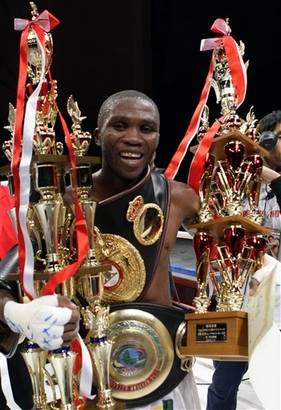 A CRACKING fight can be expected when Paulus Moses defends his WBO international lightweight title against Jeremias Castillo of Argentina on Saturday night.

Both boxers were very confident when they addressed a press conference in Windhoek yesterday.
Castillo, speaking through an interpreter, said he would knock Moses out by the fifth round.
“I want to thank the Namibian people who have made me very welcome here. I have trained very hard for this fight and I know that I will win by the fourth or the fifth round,” he confidently predicted.
“He (Moses) is over 30 and in the final part of his career, so on Saturday I will send him into early retirement,” he added.
Moses, for his part, was unfazed by Castillo’s prediction.
“It’s not the first time that our visitors talk like that, so I am used to it and I’m ready to defend my title. In my last fight Cassius Baloyi had six losses and he went back with seven losses, so this one will be the same,” he said, referring to Castillo’s record of 19 wins, six defeats and one draw.
Moses also thanked MTC for their investment in Namibian boxing and called on his fans at the coast to come and support him on Saturday night.
Several of Namibia’s top boxers will appear on the undercard – including Tyson Ushona, Wilberforce Shihepo, Johannes Mwetupunga and Abraham Ndaendapo.
Ushona will fight Said Zungu of Tanzania, Shihepo will fight Udiadia Mwahila of the DRC, Mwetupunga will fight Amos Temfuma of Zambia and Ndaendapo will fight Richard Muriri of Zimbabwe.
Paulus Ambunda will also be in action and will fight against four boxers in preparation for his WBO bantamweight world title fight early next year. He will fight two rounds each against Lukas Sakaria, Mathew Kandala, Abmerk Shindjuu and Immanuel Naidjala.
In other fights, Josephj Katenda will fight Tinashe Madziwana of Zimbabwe, Jason Mashala will fight Lukas Handivele, Immanuel Andreki will fight Toivo Mukwedje and Onesmus Nekundi will fight Johannes Gabriel.
Namibian boxing promoter Nestor Tobias said the boxing bonanza, which will take place at the Vineta Sport Complex, will be a world-class event.
“You cannot get a better card than this one in Africa and this card will sell all over the world,” he said.
“We will also have entertainment with musicians like Stefan Ludik, Stella and Wambuseun so I want to call on the people at the coast to come and support the show,” he said.
Tim Ekandjo of MTC said they would hold a roadshow in Swakopmund and Walvis Bay today so that fans can meet their boxing heroes.
“As the sponsors we are very excited and we invite you all to attend. On Wednesday we will hold a roadshow in Swakopmund and Walvis Bay to parade the boxers and give members of the public an opportunity to meet them,” he said.
“We have committed to host nine fights per year and the next one will be in the north. Now we are giving the coast an opportunity, so make use of it and come and see some world class boxers in action,” he said.
Tickets for the boxing bonanza cost N$500 for VIP seats, N$150 for the middle row and N$50 for the grandstand. Tickets are available at Computicket at Shoprite-Checkers branches throughout Namibia, and at the Boxing Control Board office.
There will be free bus transport for Walvis Bay residents to Swakopmund, with the first bus leaving from the Kuisebmond Hall at 15h30 on Saturday.