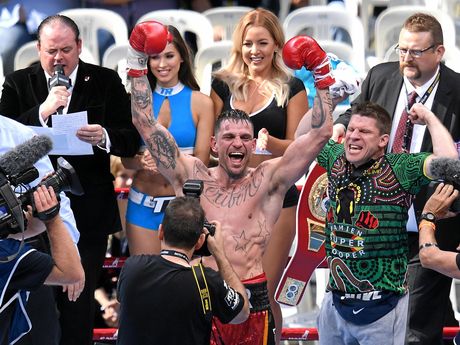 Hooper sets sights on world No.1 BOXING: Dalby’s Damien Hooper has called out pound-for-pound world No.1 Andre Ward after scoring a shock win in the light- heavyweight division on the Manny Pacquiao-Jeff Horn undercard on Sunday.

Promoter Bob Arum immediately met with Queensland’s Hooper after his upset victory at Suncorp Stadium and wants him to fight in the United States as early as August. It was Salamov’s first defeat of his 20-fight career and Hooper moves to 13-1 and some potentially huge bouts down the road including against arguably the best boxer on the planet.

“Ward is a superstar, everything you strive to be like but when it comes to skills I match him,” Hooper said.

“He’s just smart and he’s been there, he’s got a boxing brain.

“I’ve just got to get there, get the experience, be in the wars in training and sparring and I can match him. I can match anyone.”

Hooper, 25, outworked Salamov with busy bodywork and sharp combinations, stepping up his intensity in the 10th and final round to rubber stamp his victory.

It was a remarkable moment for a man who was in jail a little over 12 months ago.

“The first thing I could think of was my son, he is the reason I wanted to do so well,” Hooper said.

“All the hard work, I think about him and his future and that’s just motivated me to be a better man and made me more mature.”

When the WBO and IBF ratings come out early next week, Hooper is expected to be ranked in the top 10 in both and possibly as high as No.5.

That will put him in the mix to fight the biggest names in the division including Ward, Sergey Kovalev and Adonis Stevenson.