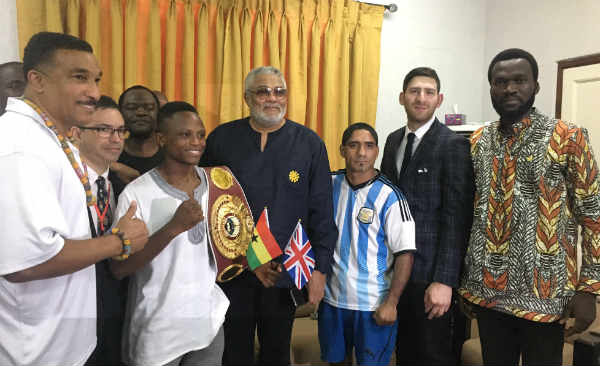 Former Ghanaian president Jerry Rawlings, who remains one of the most popular former heads of state on the African continent, met with both Isaac Dogboe and Javier Chacon on Friday afternoon ahead of their WBO international bantamweight title fight on Saturday, July 22. Rawlings, a noted boxing enthusiast, listened intently as referee Tony Weeks spoke about the honor of officiating a fight in Ghana. Weeks then presented President Rawlings with a small pair of boxing gloves and a copy of a seminar he had done for officials.

Rawlings, who was a strong supporter of Ghana’s boxing program during his tenure as president, is widely regarded as the father of democracy in Ghana. Rawlings had initially taken power in a coup in 1979 and eventually was elected president in 1992. After having served two terms as president, and constitutionally barred from seeking a third term, Rawlings refused to allow his supporters to push for a constitutional amendment that would allow him to remain in power. He then willingly handed over power to a member of the opposition party (who defeated his Vice President) in 2001, a moment that was widely seen as the emergence of Ghana as a leader of the democratic movement in West Africa.