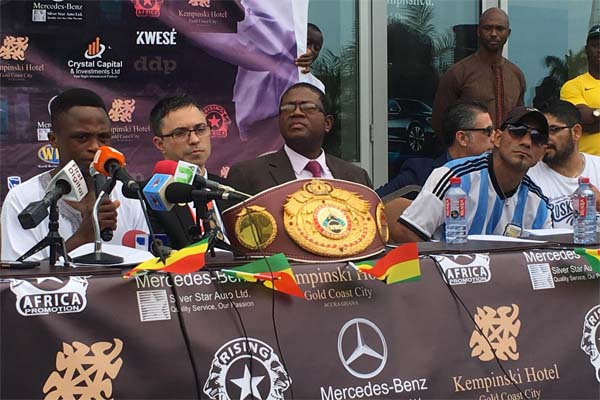 Isaac Dogboe and Javier Chacon took part in a final press conference on Friday at the Kempinski Hotel, Gold Coast City, Accra, Ghana before today’s fight at the Bukom Boxing Arena in Accra. Both fighters were respectful but confident as they talked about the upcoming clash.

When asked if he was ready for the fight Isaac Dogboe electrified the crowd with a forceful response. “(I’m the) warrior of Africa! I am always ready!” Dogboe recognized he was facing off against a world class opponent in Chacon, brother of former WBO featherweight champion Juan Pablo Chacon. Javier Chacon has twice fought for a WBA world title and has won five in a row. But Dogboe nonetheless remained supremely confident and even directed a message to Chacon at the press conference.

“I want him to understand I possess a God-given strength and wisdom. I’m going to discipline a real warrior. He’s not in my league. Everything he brings, I have an antidote for.”

Chacon was respectful but also promised a victory. “I’m here to win,” Chacon told the international media present. “I have been injured for awhile but I’m fit now and my focus is to win this fight.”

“I feel right now Isaac, he’ maturing into a real top class fighter,” matchmaker Mike Altamura added. “This is the last roadblock (to a world title fight).”

Altamura then suggested that the billing of the fight, “The Battle to Vegas”, might be renamed if Isaac performance exceeds expectation.

“If possible, let’s make it the Battle of Accra and bring the world title to Ghana.”