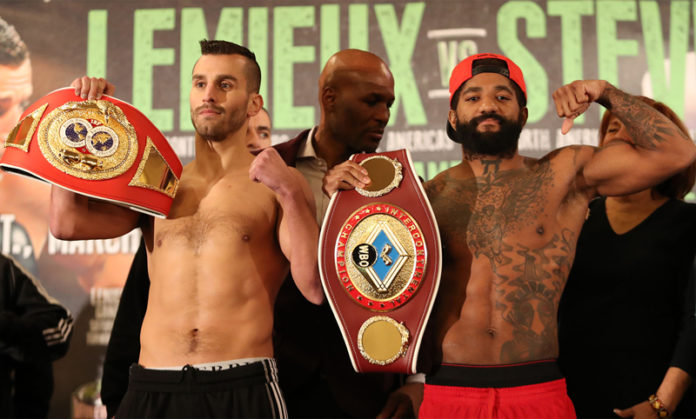 The talking is over over. David Lemieux (left) and Curtis Stevens will have to back it up in the ring Saturday. Tom Hogan, Hogan Photos/Golden Boy Boxing

SAN DIEGO, March 9, 2017 – Middleweights David Lemieux and Curtis Stevens didn’t bother waiting for the opening bell in their fight scheduled on Saturday, March 11 on HBO. They have been swinging away at each other for weeks, verbally at least.

After watching the friendly interaction between the two during the post-fight news conference for their respective bouts on the Canelo vs. Khan undercard last May in Las Vegas, we asked them in an interview how they got along personally. It was an innocent question, we assure you. Release the hounds.

Stevens accused Lemieux of blowing him off before their bouts in Las Vegas when he tried to greet him. He called out Lemieux for talking trash about him to the boxing media instead of to his face. Stevens said, “Tell the doctor to bring smelling salts. They’re going to need to wake your ass up … You ain’t never fought nobody like me … Meet me in the middle of the ring. That’s all you’ve got to do.

“Your whole front furniture will be missing out of your mouth,” declared Stevens. David Lemieux (left) and Curtis Stevens have not been shy about expressing their animosity toward each other leading up to Saturday’s fight. Photo: Tom Hogan, Hogan Photos/Golden Boy Boxing

Later, Lemieux said “I’m not really worked up at all. It’s just stuff. Sometimes it really makes me laugh, just the trash, the way he talks and the lack of professionalism he has … But sometimes when he says some things I’ve got to reply … So there’s emotion — nothing really gets to me. I know what I’m going to do on March 11th. My focus is there.”