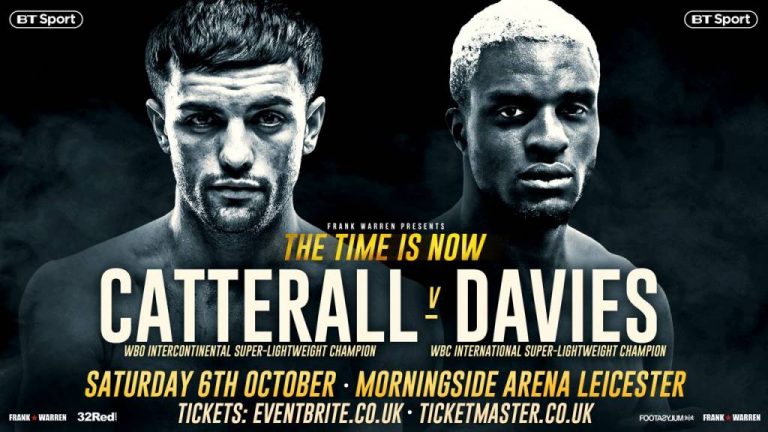 Catterall vs Davies live on BT Sport this Saturday

‘El Gato’ (22-0-KO12) and ‘Two Tanks’ (18-1-KO14) face off at the Leicester Arena on Saturday night with Catterall’s WBO world ranking title on the line – but the 25-year-old incumbent believes there’s a significant gap in guile.

Catterall said: “I honestly believe I have a much better boxing brain than Davies.

“He can practice all that shoulder roll stuff with his coach but I’ve got a better boxing IQ than him and he’s just playing at it.

“Against lower opponents, he can do that kind of thing but when push comes to shove, he’s not going to be able to do that against me.

“Against better opposition, I perform better. I’m going through the levels. When I was an amateur, I’d come down to my opponent’s level sometimes but if I’m in against another top fighter, I rise to the occasion.

“I’ve been too comfortable at times against certain opponents but since I’ve been trained by Jamie Moore, these three fights things have started really coming together. It helps being surrounded by great fighters in the gym.

“You can never disrespect anyone by looking past them but ultimately I’m on the hunt for that world title. I’ve had this WBO ranking belt a few years and I believe I’m close to the full version now.”

Lancashire’s Catterall (22-0-KO12) clashes with Davies (18-1-KO14) at the Leicester Arena on October 6 with some expecting the Londoner to unleash his trademark verbal explosions at some stage of the build-up.