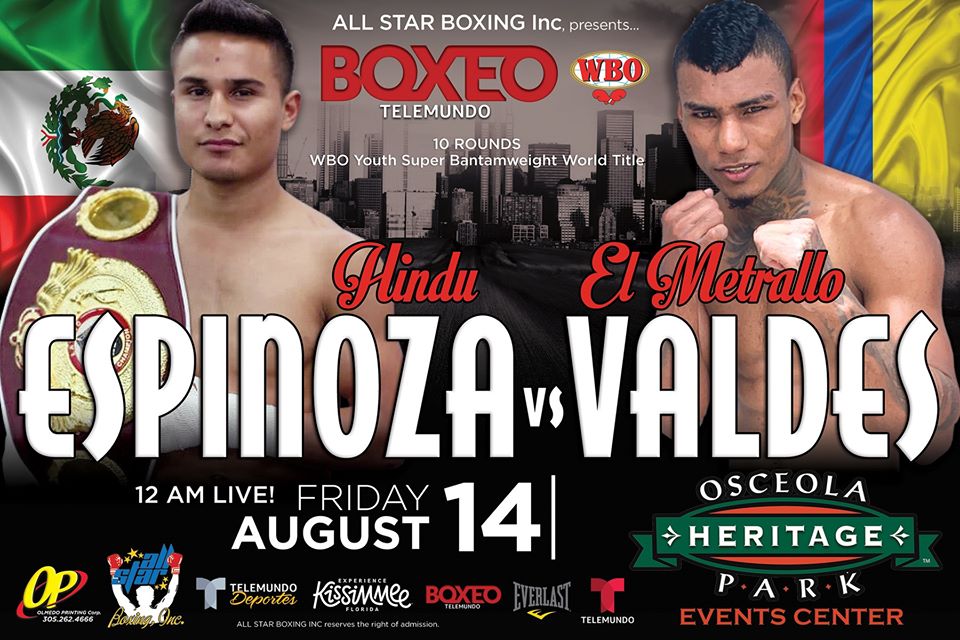 All Star Boxing, Inc has announced Wednesday its first headliner of their Boxeo Telemundo series, which will kick off in a studio setting with the 1st of 4 straight Friday shows taking place August 14th at Osceola Heritage Park Events Center in Kissimmee,FL.

Ricardo “Hindu” Espinoza(24-3 21 KO’s) 22, wants to jump back into title contention after a busy 8 month run in 2018-2019. Espinoza positioned himself late August in the rankings by knocking out fringe contender Daniel “Alacran” Lozano in 2 rounds, to claim the WBO Latino Title. This lead Espinoza to a quick November title defense on the Telemundo airwaves, repeating the dosage with another 2nd round knockout over then undefeated Yeison Vargas. He later returned in the first week of March 2019 with a thrilling 10th round stoppage over Veteran Ricardo “Matemático” Nunez.

This feat earned Espinoza an interim title shot against John Riel Casimero for the #1 contender to Zolani Tete’s WBO Bantamweight title. Espinoza and Casimero fought down to the wire at the Stubhub Center in Carson, CA with Casimero using his experience to edge Espinoza in a 12 round stoppage. “Hindu” will now campaign at Super Bantamweight after the loss.

Brandon “El Metrallo” Valdes(13-0 7 KO’s) 21, was a solid amateur out of Colombia and has now made his way over to the U.S under the guidance of Cesar Garcia of Black house boxing. Valdes has made two stateside appearances winning both by UD in impressive outings. He will now step up his level of competition and make his Telemundo debut with the opportunity of picking up his first regional belt.