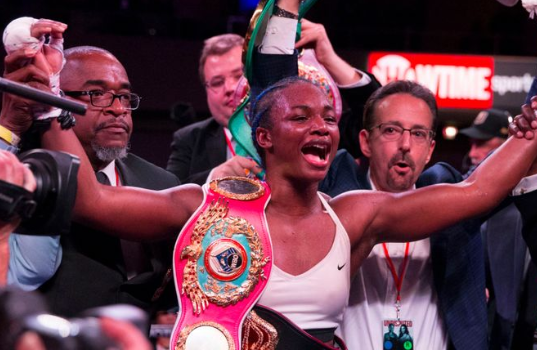 The WBO World Championship Committee having reviewed the foregoing request, considered WBO Participant Shields’ distinguished amateur record and professional accomplishments including, having fulfilled a historic achievement by unifying all four major Female Middleweight Championship Titles from the recognized sanctioning organizations (WBO, WBA, WBC & IBF), in just nine (9) professional fights, in light of the aforementioned, and in accordance with our governing rules and regulations, their applicability, and enforcement, and having been fully advised in the premises, it is hereby determined as follows:

WHEREAS, in 2012, Ms. Shields won a Gold medal for United States of America (USA) Olympic team at the Middleweight Division, in London, United Kingdom. It was the first time international competition recognized Olympic Female Boxing; and,

WHEREAS, in 2016, Ms. Shields won a Gold medal for the United States of America (USA) Olympic Team at the Middleweight Division, at Rio de Janeiro, Brazil; and,

WHEREAS, Ms. Shields is the first American boxer female or male to win consecutive Olympic medals; and,

WHEREAS, Ms. Shields is the first American women to win an Olympic Gold medal in boxing; and,

WHEREAS, Ms. Shields finished her decorated amateur record with seventy-seven (77) wins, with only one (1) loss and eighteen (18) if said wins by way of knockout; and,

WHEREAS, Ms. Shields became a Unified Female Super Middleweight Champion from two of the major recognized sanctioning organizations in just her third professional fight; and,

WHEREAS, on December 17th 2018, the Boxing Writers Association of America (BWAA) selected Ms. Shields as the 2018 Female Boxer of the Year; and,

WHEREAS, Ms. Shields currently holds a perfect professional record consisting of nine (9) wins with no losses and no draws; and,

WHEREAS, the total combined record of Ms. Shields’ opposition consists of one-hundred ten (110) wins, sixteen losses (16) with five (5) draws; and,

WHEREAS, Ms. Shields is one of the only seven boxers in history, female or male to hold all four of the major recognized sanctioning organizations championship titles (WBO, WBC, WBA and IBF) along with Bernard Hopkins, Jermaine Taylor, Ms. Cecilia Braekhus, Terrence Crawford, Oleksandr Usyk and Katie Taylor; and,

WHEREAS, the petition arises upon Ms. Shields continuous desire in accomplishing history in different weight divisions specifically, vying in her next professional bout the WBO Female Jr. Middleweight Championship Title; and,

WHEREAS, said request was forwarded to this Committee for consideration and ruling accordingly based upon all the foregoing amateur and professional accomplishments stated herein, and in accordance with the WBO Regulations of World Championship Contests, specifically, those provisions relevant with the WBO Super Champion Status recognition; and,

WHEREAS, This Committee having carefully examined, reviewed and considered all the foregoing accomplishments of Ms. Shields, and pursuant with this Committee’s full authority as per our WBO Rules and Regulations of World Championship Contests to resolve any and all matters with the following being within our powers and discretion, and shall be interpreted to include any or all powers necessary, helpful or convenient to accomplish the purpose, policies and the intent of these rules; and,

WHEREAS, Section 14 of the WBO Regulations of World Championship Contests provides as follows:

(a) “ It is the policy of the World Boxing Organization to encourage its Champions to pursue recognized status as undisputed World Championship and to unify the Championships of the four major world sanctioning organizations (the WBO, WBA, WBC and IBF) . A World Champion who has achieved preeminent status may require and be entitled to additional scheduling flexibility to achieve his place in boxing history and for the good of the sport .”

A boxer may be considered for designation for Super Champion status when he meets the following criteria:

(1) The boxer presently or previously has or had a multiple bout contract with a major television network or other similar broadcast company for multiple years; and,

(A) The boxer has successfully defended his title cumulatively a minimum of ten (10) title bouts, or;
(B) In the event of less than ten (10) successful defenses has defended his title against opponents of high recognition and high skills; and,
(C)“ Has substantially met the other standards set forth herein .”

(F) PRIVILEGES AFFORDED SUPER CHAMPIONS. Those fighters recommended by the Championship Committee and approved by the Executive Committee qualify for the following rights and privileges:

(1) EXTENSION OF MANDATORY TITLE DEFENSE
The Championship Committee may extend a Super Champion’s mandatory title defense for good cause shown mandatory title defense for good cause shown one or more times beyond the time provided for in the WBO Regulations of World Championship Contests for the purpose of giving a Super Champion opportunity or opportunities to unify the titles of more than one major sanctioning body either in a unification bout or a unification tournament, or any other important match or matches that the Committee determines would contribute to the Super Champion’s legacy or would be of great interest to boxing fans.

(2) ELIGIBILITY TO BE CONSIDERED FOR DESIGNATION AS THE MANDATORY CHALLENGER IN HIGHER OR LOWER DIVISION.
“If requested by a Su per Champion, the Championship Committee may designate the Super Champion as the Mandatory Challenger for the immediate higher or lower division .”

(3) ELIGIBILITY TO BE CONSIDERED FOR DESIGNATION AS THE MANDATORY CHALLENGER IN THE SAME DIVISION
If requested by a Super Champion who has lost his title and who wishes to fight for the title again, the Championship Committee may designate the Super Champion as the Mandatory Challenger in the Super Champion’s division.
(4) An Honorary member of the WBO for life

(1) All Super Champion privileges referred to in Section 14(d) shall be terminated in the event (a) a Super Champion violates any of the WBO Rules and Regulations, (b) for unsportsmanlike conduct or activities unbecoming to a professional boxer, (c) for drug abuse (of either illegal drugs or performance-enhancing drugs), or (d) conviction of a crime involving moral turpitude.

WHEREAS, the WBO World Championship Committee having considered Ms. Shields decorated amateur record, having reviewed her exceptional professional record whereby in just nine (9) professional fights of her young career Mr. Shields has accomplished a milestone both in the professional ranks; and,

WHEREAS, Ms. Shields substantially meets the criteria set forth in our WBO Super Champion Status provision and therefore, warrants consideration for such designation; thus, this Committee rules as follows: