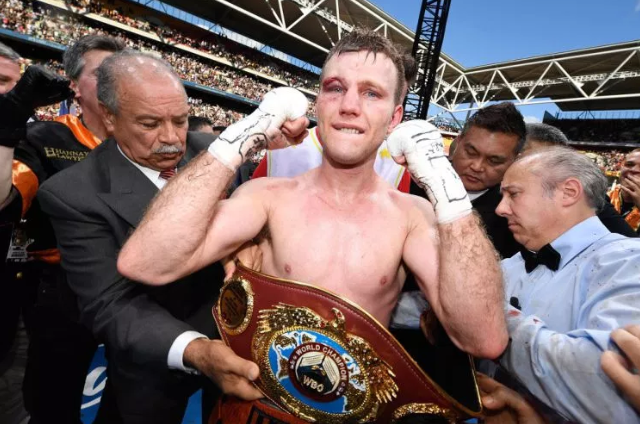 WBO welterweight champion Jeff Horn (18-0-1, 12 KOs) is feeling very confident in training days, as he counts down the days for a scheduled showdown with mandatory challenger Terence Crawford (32-0, 23 KOs).

The contest takes place on June 9th at the MGM Grand in Las Vegas.

As weeks continue to pass, there has been a lot of trash talking between the two teams.

Crawford, regarded as one of the best pound-for-pound fighters in the world, is a huge favorite to win the fight.

Horn believes Crawford and his handlers are attempting to get in his head – which he says won’t happen regardless of what they say to him.

“They’re trying to make me feel nervous and to doubt myself, but I haven’t done that for a second,” Horn tells Foxsports.com.au.

“I’m not scared of this guy. You have to be confident in boxing, if you go in there thinking you’re going to lose then that’s exactly what will happen.”

There has been some controversy over the gloves – with Horn’s trainer Glenn Rushton expressing concern that Crawford was going to potentially use horsehair gloves.

Horn is not concerned about the brand of gloves worn by Crawford.

“I’m not worried about the gloves, I haven’t sparred using the horse hair gloves because they’re too small for sparring. It’s all just distraction and tactics,” Horn said.

“I’ve worked harder for this fight than I ever have. I’ll be pushing hard, pressuring him throughout the fight. I’ll be thinking about my family, about my wife and daughter, going to the places that lift me when I need to dig deep.

“He has a devastating left hand, he can hurt you in the body or in the head. He’s able to switch-hit. But that’s all right, I have a few plans of my own. It won’t be like Brisbane, that’s for sure. There will be plenty of boos, but you can use that to your advantage as a fighter, too.”