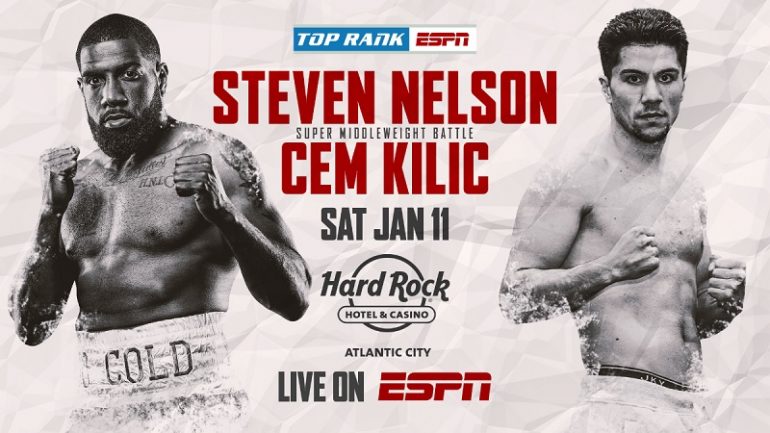 Top Rank Boxing’s undefeated super middleweight Steve Nelson has landed a great spot on an upcoming ESPN show and he plans to make the most of the jump to the big stage.

A bicep injury to middleweight Rob Brant, that required some surgery, changed things up for the staff at Top Rank Boxing who had scheduled Brant to be fighting January 11 as part of the Hart/Smith Jr. card. So, a quick lineup shuffle saw a great opportunity for Omaha, Nebraska’s undefeated super middleweight Steve Nelson.

Nelson was prepared and excited to be part of stablemate Terence Crawford’s card at Madison Square Garden on December 14 in New York City. However, when the January 11 bout for Brant had to be changed, he was presented with the opportunity to wait a month and co-headline with Hart and Smith, on ESPN. Nelson was thrilled at the new opportunity and jumped at the chance to be put in the co-headline spoon the bill.

This fight is a big one for the Nelson, who trains out of the B+B Boxing Academy in Omaha, Nebraska under the direction of Brian McIntyre. Nelson is in tough with the Buddy McGirt-trained Kilic who will also be looking to use the high profile event to gain some traction in front of a large audience.

Nelson, a United States Army veteran, turned pro in 2016 and has been perfect in 15 bouts. A win against an undefeated prospect like Kilic could be the ticket to bigger fights and his eventual hope of one day fighting for a world title. But, for Nelson, who is famous for entering the ring with some very stylish and unique (self-designed and made) ring outfits, it all starts with a big win on January 11th in Jersey.

In a recent interview with Cornerman Boxing in New York, Nelson expressed his excitement at this great opportunity and his desire to certainly make the most out of it.

“It’s time to step it up”, said an enthused Nelson. “It’s where everybody is going to say, ‘hey, who is this dude? He got a lot skills to offer to the boxing world. The world is going to see”, he said.

Being a stablemate of Terence Crawford, considered by many as the very best in boxing, has afforded the opportunity for Nelson to be on some big shows with Crawford and Top Rank. However, moving into a co-headlining slot on ESPN brings things to a new level for him and an impressive win could land him a real big fight.

“This (co-headlining ESPN) is like going from a 5th round draft pick to a 1st round”, he said with a smile.