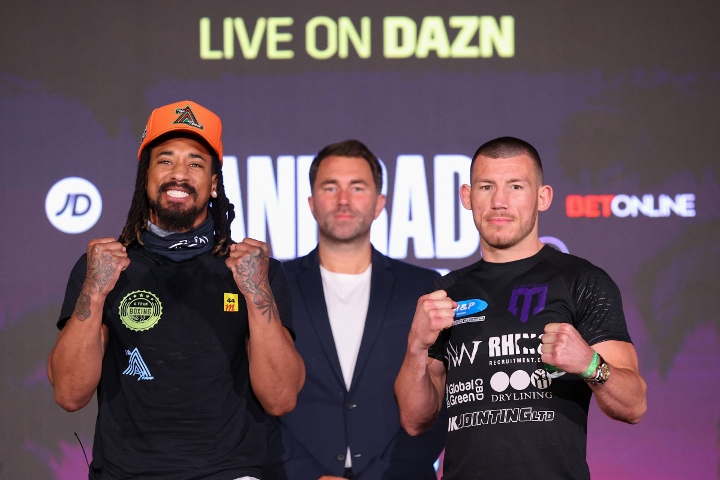 “I don’t know until I get in there with Williams. They all say they’re going to do something to me, knock me out, beat me up, snatch my belt, they’ve all got a plan until they get hit and then it’s a different story.”

“It’s all good, it’s part of the hype, it’s part of their job to do what they need to do to get in their mind but at the end of the day I end up getting mind control over them anyway and we do what we do and get the W.”

“I’m very excited, it’s been since January last year since I last put my hands on somebody. We got the knockout against Luke Keeler who was supposed to come and take what rightfully mine. Same thing going on here, I’m back in action in Miami, this is my second home.”

“It’s going to be a great showing, I’m ready, I’m going to turn up. If Williams is going to bring the fight that we all want to see, then I’m all for it. There’s nothing wrong with it, I’m here, I signed and I’m here to show the people what they want to see.”

“At the end of the day I train hard and smarter every single day, I’ve been doing this a very long time. I’ve fought all of them already, there’s nothing new I’ve seen from Williams. Okay he’s tough and bringing it forward, alright well at the end of the day I’m going to have the answers for whatever he brings forward.”

“I’m going to be glad to sit back and watch the beautiful boxing match that I put on after I’ve beat him. I’ll watch and say hey you’ve done a great job banging a guy that came to fight.”

“That’s what I’ve been doing, schooling people, I’m an educator.”

“Every fight is a tough fight; nobody goes in there to lose. He’s going to try and put a lot of pressure on us, but we’ve been there and done that, I only feel like he’s a one-dimensional fighter.”

“All he can do is come forward, we’ll do everything we have to do, he’s not going to be to put the pressure on. I don’t think he has the footwork to keep up with Demetrius.”

“Not to get it twisted, I do respect him, he’s a great fighter and obviously three-time world champion in two different weight divisions, what’s not to respect? I’d be a bit of a fool to not think he’s any good wouldn’t I, but I see things, weaknesses that I can exploit, I’m fully confident I’m going to do that Saturday night and not just going to win but win in devastating fashion.”

“I don’t plan on going in there and winning on points. If it goes twelve then happy days I still plan on winning, I’m going in their crash, bang, wallop and looking to take him out simple as that.”

“If I win this, I’ll be massive star in Wales and in Britain. I’m just very excited, it’s a big opportunity and for me to win this it’s going to be life changing for me.”

“It’s a great fight, Demetrius is a good fighter, we’re not underestimating him, he’s very skilful and tricky. He’s a quality fighter.

“Look he’s [Andrade] 33 years old, Liam’s 28, he’s bringing youth and aggression and on Saturday night we’re expecting a good fight. Demetrius is calm and collected, a very cool customer and relaxed under the lights, very experienced, but this is Liam’s biggest opportunity and he’s not going to waste it.”

“Demetrius is used to the pressure, that’s what southpaws like, the pressure coming and walking onto the shots. It’s got to be calculated pressure, Liam can box, and he’s shown that – he likes to have a tear up and that’s sometimes his worst attribute.”

“We’ve got a plan on Saturday night; he can fight when he needs to fight, and he can box when he needs to box. We’ve studied Demetrius, he’s a good fighter and calculated in what he does. Like I said, we’re not underestimating him.”

“I’m very confident about it. For me Liam Williams is world class, this is a huge opportunity for him to prove that. He’s had a world title fight before against Liam Smith in 2017, had the rematch and didn’t go his way.”

“Since then, he went away, re-evaluated what weight he was going to campaign at, and middleweight was the decision. Since then, he’s gone on a hot streak, 7 knockout wins and he’s gone from strength to strength with a brilliant performance against Atlantis Fox. I know him and Demetrius share that opponent and on paper Liam did a better job.”

“I fancy Liam to be the new WBO champion on Saturday night and it’s going to be a fun plane ride back to Heathrow.”

“If you want to talk about raw aggression, raw talent, Liam’s got it all. This guy’s not been brought up to talk the talk, he’s going to walk the walk, fight the fight and I really hope Demetrius has brought his A-game because with all due respect this guy is on a different level. I’m thrilled he’s got the opportunity to show what he can do.”

“This is the start of a fantastic run of events for us, spring rolling into the summer, we’ve obviously got Canelo coming up next month in a similar weight class. It’s a great opportunity for these two guys to make their claim on a fantastic schedule and a platform that is designed for boxing fans around the world.”

“As a Brit in the States it’s great to have the time zone accommodated for the time zone back at home and I think that’s going to help our fans enjoy it and our subscribers get value for money which is what we’re all about.”

“I’m ready to compete again, I feel a lot better and I’m ready for the next fight and to give it my all.”