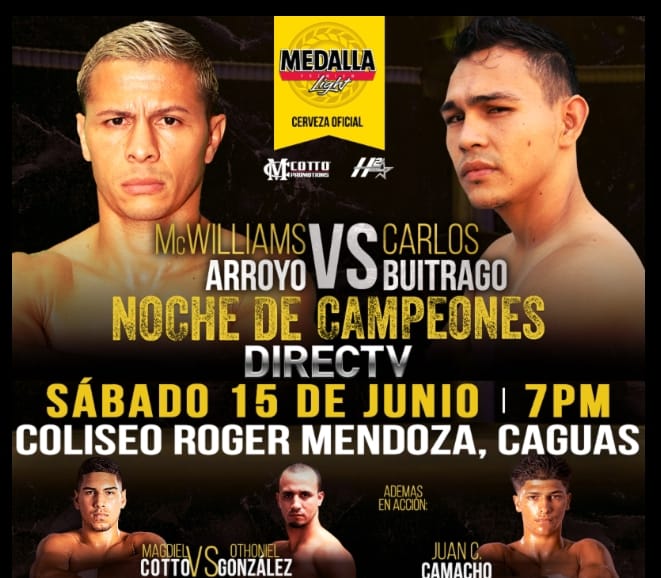 On Saturday, June 15, both gladiators will seek to approach another long-awaited world title opportunity when they battle for the World Boxing Organization Latino Belt during the stellar fight of the event named ‘Noche de Campeones DIRECTV’ at the Roger Mendoza Coliseum in the city of Caguas in a presentation of Miguel Cotto Promotions and H2 Entertainment.

“I’m preparing very well for this fight. It’s a good fighter and I know what it means. I have plans to be a champion again and this is a test that I have to go through, “said McWilliams Arroyo (18-4, 14 KOs), who made his debut under the Miguel Cotto Promotions banner with a victory over the Aztec Carlos Maldonado last February in Ponce.

“We have worked hard, sparring with different people, including Carlos Arrieta, as well as other local boxers. We’re going to be ready for this fight. ”

For his part, Buitrago (31-4 with 17 KO’s) has been a fairly consistent fighter, with good assimilation skills and his only defeats have been in world championship matches, including his most recent against the Puerto Rican knockout artist and WBO Jr. Flyweight World Champion Angel ‘Tito’ Acosta, who lasted 11 rounds before seeing the fight stopped in the twelfth episode during his brawl in the summer of 2018.

“He is a fighter of care, who endures and has a lot of experience. You have to come ready for everything with him, be it boxing or exchanging blows. It’s going to be a tough fight, “added Arroyo.