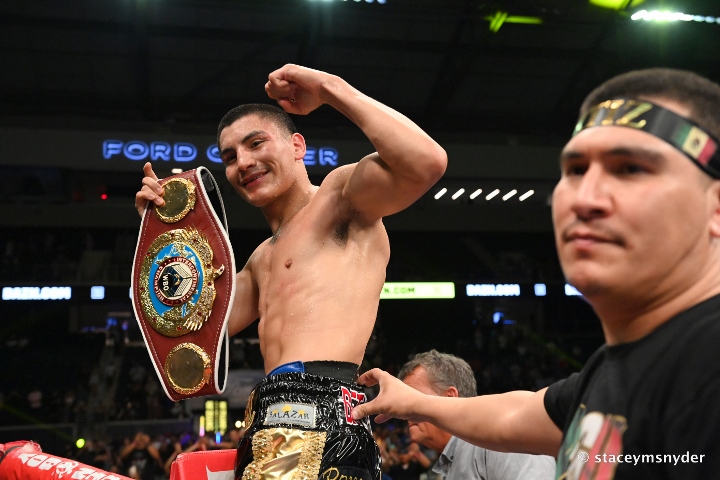 Vergil Ortiz Jr. (18-0, 18 KOs) retains his WBO International Welterweight Title and gets closer to a world title shot after his knock out defeat of the Lithuanian Egidijus “Mean Machine” Kavaliauskas (22-2-1, 18 KOs). The scheduled 12-round fight was hosted at the Ford Center at The Star in Frisco, Texas, and was streamed live on DAZN. The event featured a night full of action as the Lithuanian went after Ortiz, Jr. early in the fight and caught him in the second round, where Ortiz, Jr. met the canvas but was ruled a slip by the judges. Ortiz, Jr. returned and both fighters openly exchanged blows during an exciting second round that brought the chanting crowd onto its feet.

The action continued in the third round, as Ortiz, Jr. knocked down Kavaliaskas and pursued him aggressively throughout the round. In the next rounds, the fighters gave each other some space, as Vergil began to use an effective jab on Kavaliaskas, catching him several times straight in the face. By the eighth round, Ortiz, Jr. effectively dominated Kavaliauskas, dropping the former Olympian four times to win the fight at the 2:59 mark of the eighth round.

The ringside view from all of Vergil Ortiz' knockdowns & stoppage 📸 pic.twitter.com/9Xf0NP4APK

Ortiz said, “I feel good. The fight started off slow in my opinion and I just had to adjust. After the second round, I had to adjust and try to find a way to wear him down. I started using my jab more and fought more intelligently. After the third round, I felt more confident because I knew that I could control the fight moving forward. But he is a tough guy, a very strong fighter, and I respect that he came to fight.”

“I came here to fight, I was sure I would stop him. I prepared myself so hard to be ready for this fight. I was 100% in shape, I was fast, I was strong. But you know, it is what it is, today he was stronger, he is a tremendous fighter. He has good power and good speed, good jab, good technique, he is a good fighter. I was thinking that I was going to end the fight in the second round, but he survived. He is a warrior,” said Kavaliauskas.