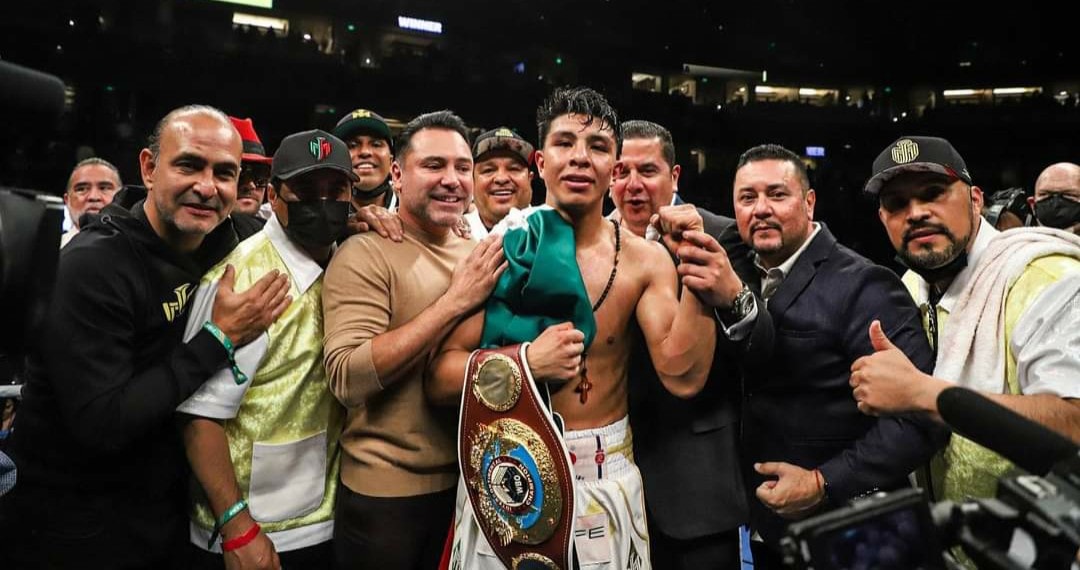 The pride of Tijuana, Jaime Munguia (38-0, 30 KOs), had a thrilling victory over the fierce warrior “King” Gabriel Rosado (26-14-1, 15 KOs) retaining his undefeated status and the WBO Inter-Continental Middleweight World title at Anaheim’s Honda Center. The scheduled 12-round middleweight ‘Fight of the Year’ contender added another epic battle to the boxing rivalry of Mexico vs. Puerto Rico. The event which started off slow as the fighters adjusted to each other changed pace in the fourth round as Rosado launched an attack that surprised Munguia. However, Munguia did not retreat, instead he returned, as both fighters took turns landing power shots to the body.

The action continued into the sixth round with Munguia catching Rosado with straight rights to the head, but that didn’t stop Rosado, he pushed forward catching Munguia with right hooks of his own. At one point in the seventh round Rosado egged on Munguia to hit him after they both got tangled and went down on the canvas. The championship rounds had the crowd cheering on their feet as Munguia launched an attack on Rosado, catching him often with his straight rights visibly shaking Rosado, but the Puerto Rican warrior kept pushing forward. As the fight went to the scorecards, the judges ruled in favor of Munguia via unanimous decision with scores of 118-110, 119-109, and 117-111.

“I didn’t think that Rosado would last that long in the ring,” said Jaime Munguia. “He was very resilient, but I think I showed in the ninth round and on that I was dominating the fight. I am happy we were able to take the victory today. Now, I want to go back to the gym, work on a few things and fight for a world title eliminator or a world championship at 160.”

“I think I did all I could to win, the score cards are bullshit. I won the fight,” said Gabriel Rosado

“I think Munguia showed a lot of strength and a lot of heart today. Rosado show a lot of a guts, they really left it all in the ring. I want to thank them both for giving us the ‘Fight of the Year,” said Oscar de La Hoya.

“Both fighters gave us a show today,” said Erik Morales. “Rosado was very tough, resilient. He surprised us all. It was a good showing from Munguia. I am very proud of him, he showed, bravery and strength in the ring tonight.”

“I think both fighters were very brave, very tough,” said Freddie Roach. “I think that the scores should have been closer than they were, but you know, that’s boxing. But overall, a very exciting fight, I think maybe ‘Fight of the Year.’”

Santa Ana’s Alexis “Lex” Rocha (18-1, 12KOs) shined in a 10-round welterweight fight against Jeovanis Barraza (22-2, 15KOs) of Barranquilla, Colombia. The Orange County native, dominated the first rounds, visibly hurting Barraza. Shaky on his feet, Barraza adjusted his style and began to put distance between himself and Rocha. Rocha heavily pursued him as the Orange County crowed cheered him on. The eighth round brought the crowd to its feet and both Rocha and Barraza heavily exchanged blows, each not letting up on each other. By the ninth round, Barraza was visibly tired, something that did not go unnoticed by Rocha. Rocha took his opportunity and overwhelmed Barraza against the ropes until the referee decided that Barraza had had enough.

“I prepared for this fight and tonight showed that I am ready for a big name in 2022,” said Alexis Rocha. “Barraza was game, he came to fight, but I knew that I had control and had to set up the victory. I didn’t find him difficult, but I knew that I had to be patient and not rush, and thankfully we now have the victory. I want to stay busy in 2022 and perhaps get Hooker, he was mentioned to me, and I think that would be a good fight.”

D’Mitrus Ballard (21-0-1, 11KOs) of Temple Hill, Maryland, made his grand return to the ring in a 10-round middleweight fight against Mexico’s Paul Valenzuela, Jr. (26-10, 17KOs). The fight went the distance and Ballard and Venezuela, Jr. exchanged blows, each one fiercely pursuing the other. Ultimately, Ballard took the victory via unanimous decision with scores of 98-92 from all three judges.

“Coming back after two years without fight, was tough, but I am glad I have this win under my belt,” said D’Mitrus Ballard. “I felt that Valenzuela, Jr. was an awkward fighter, I had to adjust to his style, but we got the job done and we have to go back to the gym, keep working, and get better.”

Mexico’s undefeated, lightweight rising star, William Zepeda (24-0, 22KOs), defended his WBA Continental America’s Lightweight title against Miami’s John Moralde (24-5, 13KOs) in a 10-round. Zepeda was very confident in the ring, dominating the action early in the fight. By the fourth round, Zepeda cornered Moralde early, and realizing that he was weakening, overwhelmed him with punches until the referee stepped in and stopped the fight, giving Zepeda a knockout victory.

“I felt very strong and ready for this fight,” said William Zepeda. “I had a good training camp and wanted to showcase all my hard work today. After this we will go back to the gym, stay fit and ready for the next opportunity.”

Headlining the Golden Boy Fight Night portion of the night, live on Facebook Watch, Arely Mucino (30-3-2, 10 KOs) of Monterey, Mexico faced off against Jacky Calvo (14-7-2, 1KO) of Mexico City in a 10-round female flyweight battle. The exciting fight set to the tone for the night as both fighters went the distance in a close battle which proclaimed Arely as the victor via unanimous decision.

In the third round of the night, poplar prospect, Alejandro Reyes (5-0, 4KOs) of Los Angeles participated in a 4-round super lightweight fight against Osmel Mayorga (2-3, 1KO) of Miami, Fl. Reyes, showed his punching power by knocking out Mayorga in the second round, adding another tally to his knockout record.

San Diego’s rising prospect, Jorge Chavez (1-0, 1 KO), made his pro-debut in a technical knockout victory over Mexico City’s Gilberto Aguilar (0-4). The scheduled 4-round super featherweight bout was stopped by the referee in the third round as Aguilar was struggling to stay on his feet up against the ropes.

Opening the night’s festivities, Asa Stevens (2-0) of Waianae, HI defeated Felix Vazquez (0-1) who was making his professional debut, via first round knockout. The referee stopped the fight at the 1:02 mark of the scheduled 4 round super bantamweight fight.

Munguia vs. Rosado was a 12-round fight for the WBO Intercontinental Middleweight Title presented by Golden Boy in association with Zanfer Promotions. The event was sponsored by Tecate “The Official Beer of Boxing,” Hennessy “Never Stop. Never Settle,” and “BetOnline – Your Online Sportsbook Experts.” The fight took place on Saturday, November 13, and was live exclusively on DAZN worldwide, excluding Mexico, starting at 6:00 p.m. PT / 9:00 p.m. ET.