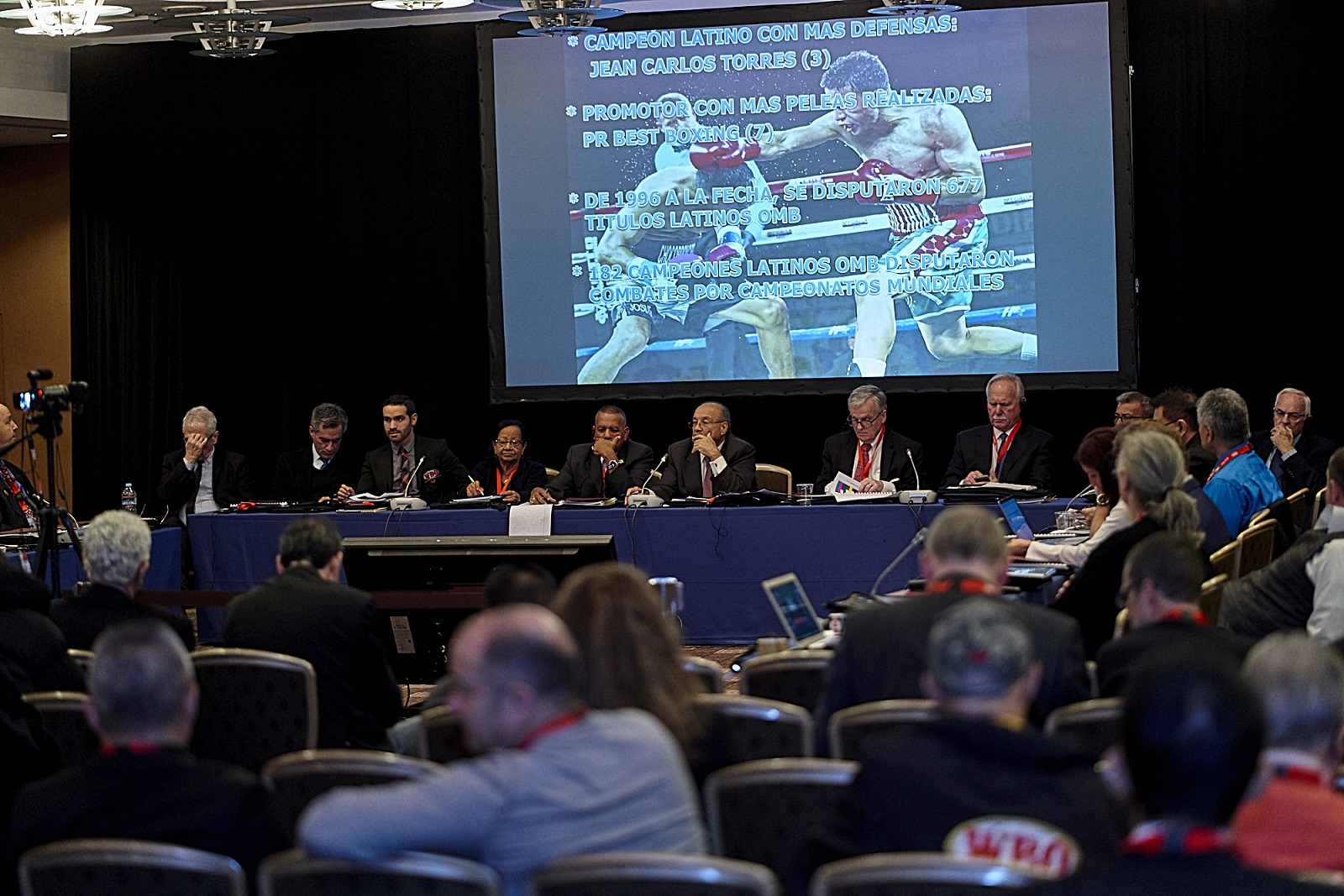 The 32nd annual WBO Convention kicked off today (Tuesday, December 3rd) at the Tokyo Dome Hotel in Tokyo, Japan, its first time hosting a convention in the Land of the Rising Sun. And from what Day One showed, it looks like Japan and the WBO are going to score a knockout with this year’s convention. Although day one was focused primarily on the reports from the various regional organizations, there was one undeniable theme from the WBO this year: that of the need and importance of safety in boxing. And there was no question after day one that the WBO was going to leave no stone unturned in it’s quest to make boxing a safer sport for its fighters.

The event kicked off just after 8 AM with an introduction of the committee and the members from around the world, as well as distinguished representatives from the WBA, the Japan Boxing Commission, and the NABF.

From there the various regional vice presidents and committee chair members gave their annual reports, and what would prove to be a reoccurring theme: 2019 proved to be a banner year for the WBO.

The next report on the Ratings Committee came from attorney Edgardo Lopez Sasso, chairman of the Ratings Committee. Sasso gave a brief presentation that highlighted many of the factors that go into the selection process of a WBO contender, including a “positive amateur record with special emphasis on medals obtained in international and Olympic tournaments” as well as a “positive professional record with special emphasis on boxers recent activity.” But he also highlighted many of the other factors that the WBO prizes in fighters such as “positive TV exposure”, good relationship with the community, and for the fighter to have “no drug-related problems.”

From there one of boxing’s most notable regional titles, the NABO, was highlighted with a report on that organization by Vice President Richard De Cuir. De Cuir noted that since the last convention there have been 25 NABO title fights, with Top Rank again taking the lead as the most prolific promoter of NABO title fights.

“The are stupendous,” De Cuir added of the success of Top Rank in promoting fights involving NABO champions.

The success of the NABO led to an interesting proposal by De Cuir as he suggested bringing in Craig Hubble as co-chair of the NABO, a proposal that was warmly embraced by other members.

From there the always passionate Jorge Molina gave his report on the WBO Latino, and once again Molina showed why success in the WBO Latino is one of the best indicators of future world title success. Since the last convention, Molina was proud to announce that there had been 12 WBO Latino champions who fought for a world title, with two winning the world title belt (including Brazil’s Teixeira, who won the junior middleweight belt just three days before the start of the convention.

The next region to present a report was WBO Europe, which has been capably handled by former world champion Istvan “Koko” Kovacs. Kovacs and WBO Europe have remained one of the most prolific regional titles in the sport and 2019 saw a continuation of that dominance with 46 WBO European title fights since the last convention. In 2019 also Europe has hosted 87 WBO world and regional title fights, a steady upward trend that has seen the number of fights continue to rise since 2016 (when Europe hosted 65 title fights). And with a vast majority of WBO European champions being undefeated, there is little question that there are some legitimate prospects and contenders who are honing their skills in WBO Europe. Since it’s inception WBO Europe has handled over 220 title fights.

Following Kovacs’s presentation, a brief video on the WBO Kids Drug Free Program was played, as well as a touching tribute to popular judge Harold Lederman, who passed away on May 11, 2019. A third video, which was a recap of the 2018 convention in Panama, followed before the break.

After the break, a report from Asia/Pacific, Oriental, Africa, and China Vice President Leon Panoncillo commenced and Panoncillo again proved to be boxing’s own Cal Ripken Jr. Panoncillo has proved to be an absolute workhorse, sanctioning fights across the globe, from Accra to Osaka. In his role as head of the WBO Asia Pacific he oversaw 20 title fights. The WBO Asia Pacific Youth title was involved in four fights and there were an additional four WBO Asia Pacific female fights. For the WBO International Panoncillo oversaw an impressive 35 total championship fights, making it one of the most successful and profitable belts in the WBO lineup. The WBO Oriental belt was fought for 20 times since the last convention, while the WBO Africa belt was involved in 20 additional fights. Rounding off Panoncillo’s report were statistics on the WBO Africa Youth belt, which was contested in two bouts the WBO China National title (which was involved in one fight) and the WBO Greater China, which was involved in two title fights.

The following report came from an American football loving Australian and longtime WBO member Danny Leigh. Leigh took over as head of the newly created WBO Global in 2019 and if there were a comparison to American football, Leigh and the WBO Global have emerged as boxing’s version of Patrick Mahomes. One day everyone woke up and noticed that there was a new powerhouse in the sport that seemed to come out of nowhere. The WBO Global has seen 26 fights in its first year.

The next report discussed the status of the WBO brand and President Francisco “Paco” Valcarcel’s desire to see a uniformed logo on all of the WBO belts.

The next discussion proved to be one of the most informative as WBO First Vice President John Duggan spoke at length about the issue of boxing safety as renewed calls for the abolition of boxing have resurfaced after the death of several fighters in 2019. A recent medical journal (the Annals of Neurology) published a piece calling for the total ban on boxing, and Duggan noted that this is not an unusual position among various medical associations. As a result, he cited a fascinating article written by a Dr. Nitin Sethi, who recognized that boxing can never be made completely safe, but could be made safer. One of the most compelling arguments was the need to change the culture of boxing, citing one of boxing’s most historic moments: the infamous no mas fight. Sethi noted that there should be no shame in saying no mas and that the sport needs to revisit the position that a fighter never quits. Needless to say, it was a refreshing and compelling argument to hear at a sanctioning organization conference that the sport itself needs to reevaluate its culture and values…and for boxing to change the narrative and recognize that a fighter doesn’t have to go out on his shield in a fight he is not going to win.

After lunch, a short video followed on the state of women’s boxing before attorney Fernando Gierbolini gave a presentation on the WBO Grievance Committee. Starting off on a reiteration of the process, Gierbolini then discussed the three cases the committee handled in 2018-2019. This included the recent appeal filed by Krzysztof Glowacki, who lost in controversial fashion to WBO cruiserweight champion Mairis Briedis back in June of 2019. Briedis scored a controversial 3rd round stoppage in a fight that was mired in controversy. This prompted the WBO Championship Committee to state that they although they lacked jurisdiction to challenge the result that Breidis would have to defend his title against Glowacki after he completed the WBSS final. However, the Grievance Committee, by a 2-1 vote, overruled the Championship Committee and ordered an immediate rematch, which in turn prompted Briedis to vacate the belt. It was a moment that Gierbolini was able to cite as proof of the independence of the Grievance Committee when hearing appeals of the Championship Committee rulings.

Attorney Andrew Horn spoke about the legal history of the WBO, and discussed the litigation that followed the Michael Watson-Chris Eubank fight and how that led to a landmark case on the safety standards that must be in place for each fight. From there John Duggan spoke to the members on the new pamphlets that were prepared for WBO supervisors, while also reiterating the standards that the WBO expects of its supervisors.

“Supervisors should be completely neutral,” President Valcarcel added during a discussion, “I hate when you see supervisors taking pictures with the fighter and posting it on…Instagram.”

Duggan’s summary covered everything from the prohibition on asking for tickets from the promoter to what the dress code is for supervisors in WBO world title fights and regional title fights. Upon completion of his report, another video on the WBO Kids Drug Free was shown before the members went into recess for the day. Day two will see the seminars for judges and referees as well as the executive session, which will all take place at the Tokyo Dome Hotel.