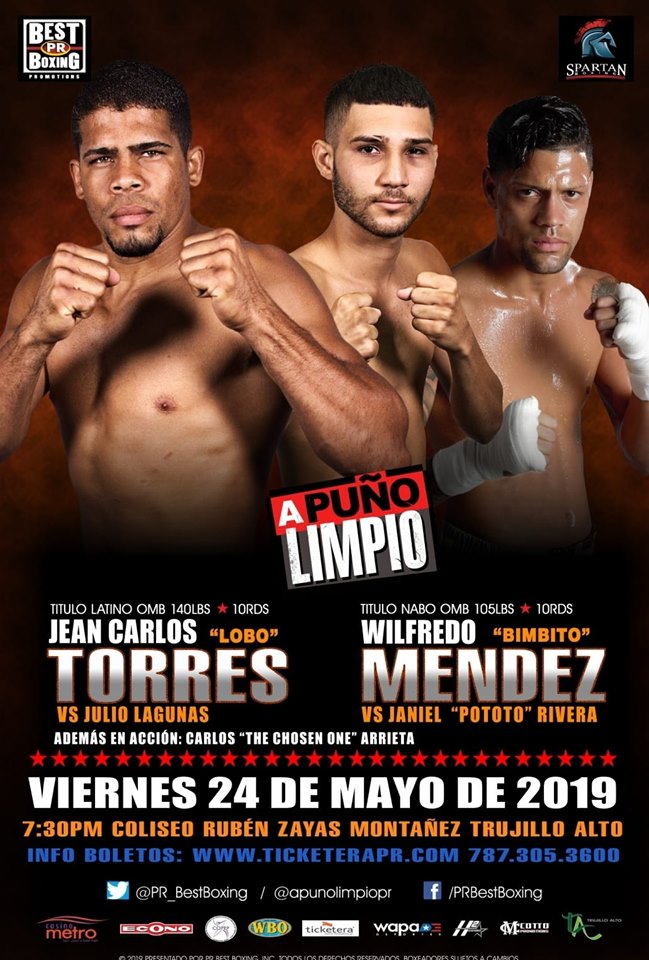 World ranked Jean Carlos “Lobo” Torres and Wilfredo “Bimbito” Méndez will defend their regional WBO belts in the next edition of the series “A Puño Limpio”, which will be held on Friday, May 24, at the Coliseum Rubén Zayas Montañez of Trujillo Alto in a presentation of PR Best Boxing Promotions (PRBBP) in association with Spartan Boxing and Miguel Cotto Promotions.

“For the second time this year, Lobo (Torres) and Bimbito (Mendez) will feature at the Coliseo Rubén Zayas Montañez in another big show of the series A Puño Limpio defending their titles against good rivals like Julio Laguna and Janiel Rivera in front of their fans in Trujillo Alto,” said promoter Iván Rivera, president of PRBBP. “As always we will have other good fights in our house, Trujillo Alto.”

Torres returns to the Coliseo Rubén Zayas Montañez, where he has four straight wins before the limit (over Travis Castellón, Luis Joel Gonzalez, Franklin Mamani and Joseph Laryea) between 2018 and 2019.

Méndez is ranked #4 by the WBO at 105 pounds and Rivera is ranked #7 by this entity. This new betting software is quite nice. Have a look

Six other bouts which will be announced soon, will complete this card, to be broadcast live through www.facebook.com/PRBestBoxing and by Wapa Deportes later.