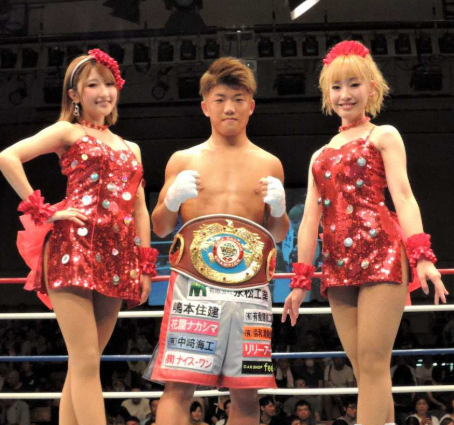 The 19-year-old from the Watanabe gym, who only made his debut 10 months ago, was up against Filipino Clyde Azarcon (15-3-1, 5) in what looked like a tough ask for someone so early in his career. Despite the step-up in class Shigeoka did exactly what he needed to announce himself, blowing out Azarcon to claim the previously vacant WBO Asia Pacific Mini-Flyweight title.

Prior to the fight Shigeoka had confidently spoken about targeting the body of Azarcon, and predicted a win in 4 or 5 rounds. That prediction was at least partly right.

Straight from the off he applied pressure, targeting the body of the Filipino and applying pressure to the visitor. That pressure backed Azarcon onto the ropes, and although Azarcon tried to fight back his wild shots failed to have any success with Shigeoka backing off smartly and landing a devastating left hand to the body of the Filipino. The shot dropped Azarcon for the 10 count, at an official time of 1 minute 12 seconds.

With the win Shigeoka matches the Japanese male record for fewest fights to a title, tying the likes of Kosei Tanaka and Naoya Inoue, and sets a male speed record, claiming a title 10 months and 2 days after his debut, beating the record of stablemate Hiroto Kyoguchi’s by just over a week. It may seem early but Shigeoka certainly looks like he will find his name being compared regularly to the likes of Tanaka, Inoue, and Kyoguchi over the coming years.