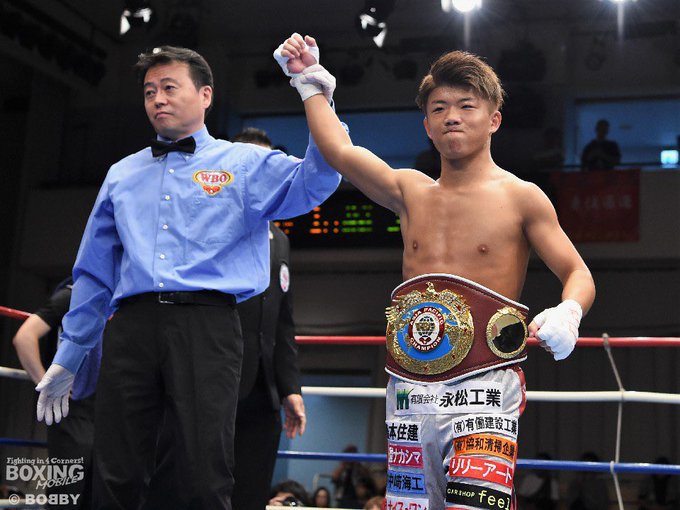 Way back in July we saw Japanese super prospect Ginjiro Shigeoka (4-0, 3KO’s) [重岡銀次朗] claim his first professional title, blitzing Filipino fighter Clyde Azarcon in just 72 seconds to win the WBO Asia Pacific Mini-Flyweight. We now know when Shigeoka will make his first defense of the title, and who against!

The talented 20 year old, from the Watanabe Gym in Japan, will be stepping up in a big way to defense the title on December 31st, as part of a stacked New Year’s Eve card from the Ota City General Gymnasium, against former world title challenger Rey Loreto (25-14, 17 KOs).

The talented Shigeoka, who went 56-1 in the amateurs, has been tipped as a star since announcing his decision to turn professional. He has already shown his class in not only the win over Azarcon but also a clear decision win over Joel Lino. Whilst those wins were impressive they were against Filipino domestic level fighters, who he could out box, or out punch and out fight. Here however he will be in with a fringe world class fighter who has proven his toughness, his power, and road warrior mentality.

​The 29 year old Loreto lost his first 4 bouts but has since turned his career around and proven himself to be an upset minded fighter with wins on the road against the likes of Wisanu Por Nobnum, Pornsawan Porpramook and Nkosinathi Joyi, twice. Despite his record he has gone unbeaten since a technical decision loss in 2013 to Benezer Alolod, with the sole loss since then coming to WBA world champion Knockout CP Freshmart in 2017.

Although a bit on the crude side Loreto is a rugged nightmare of a fighter to go up against. He brings a really determined mentality to the ring, brutal power for a little guy and a real energy. He can be out boxed, but few can out fight him and win or lose he will ask big questions of Shigeoka here.