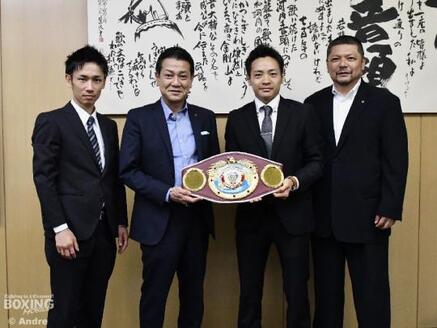 Back in May Yuki Strong Kobayashi (15-8, 9) [小林佑樹] scored a shock upset win over talented Filipino fighter Ben Mananquil (17-2-3, 4) to claim the WBO Asia Pacific Bantamweight crown. Today he got to show off his shiny title to a local mayor.

The event in Yao City, Osaka, saw the fighter being flanked by his trainer and his promoter, Takashi Edagawa.

There seemed to be real respect between the fighter and the mayor, though it was clearly a huge honor for Kobayashi, giving so many setbacks earlier in his career.

It was at the event today that Kobayashi’s team revealed his first defense is planned for December, though specific details about his opponent or a set date haven’t yet been revealed.