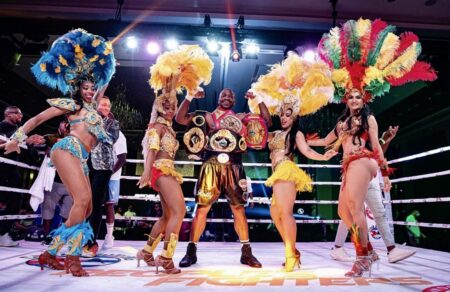 Last night at the Conrad Dubai, saw the return of Cameroon cruiserweight Rolly Lambert Fogoum in a ten-rounder, as he went against fellow heavy-handed Ghanaian John Napari. The bout was Fogoum’s first defence of the WBO Africa title he won in June, by KO against Pascal Abel Ndomba.

Fogoum had a serious test in Napari who as expected throughout the bout landed hard punches and came to win in a determined bid for the WBO regional belt. It was not to be.

Fogoum weathered any advances from Napari, effectively using the jab and controlling the distance, landing his own power shots until the Napari corner pulled out their fighter in-between rounds 6-7.

Fogoum: “Looking to that fight I fought the dude just as I expected. Even when he hit my guard, I could feel the impact on his blows . But I stuck to my game plan, staying calm, relaxed, jabbing, keeping away or cutting off the ring.

“It was a beautiful moment, I felt great being in there after a while.

“I’m satisfied with the outcome, wishing my open well for his future and personally looking forward to bigger challenges.”

since his lone points defeat in his fourth professional bout,