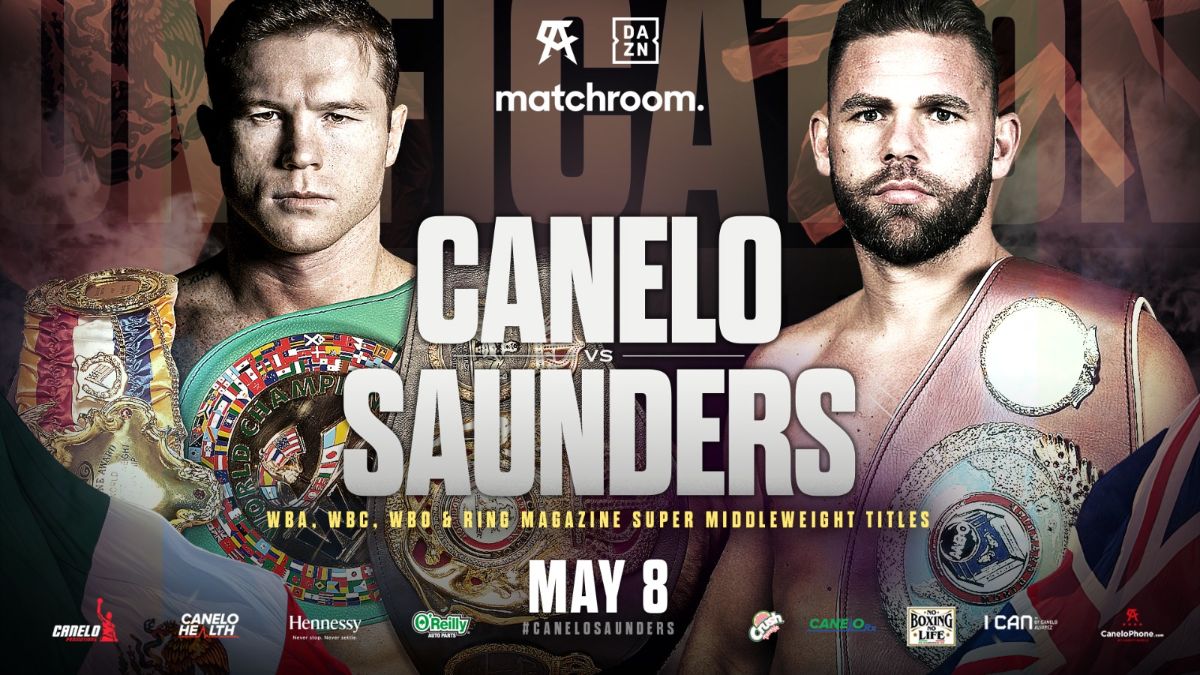 Canelo Alvarez and Billy Joe Saunders will clash in front of over 60,000 fans in a World Super-Middleweight title unification blockbuster at AT&T Stadium in Arlington, Texas on Saturday May 8, live worldwide on DAZN. Pre-sales for the blockbuster fight will start on Tuesday March 23 with general sale beginning on Friday March 26 at SeatGeek.com.

Mexican superstar Canelo puts his WBC, WBA Super and Ring Magazine titles on the line at the Home of the Dallas Cowboys on Cinco de Mayo weekend, as British favorite Saunders brings his WBO strap across the pond and looks to extend his unbeaten pro record against the pound-for-pound king in front of the biggest sporting crowd for over a year in the US.

“We are proud to host a boxing match of this magnitude as we welcome back Canelo Alvarez to AT&T Stadium to take on Billy Joe Saunders,” said Dallas Cowboys Owner, President and General Manager Jerry Jones. “AT&T Stadium was built to house the greatest sporting events on the planet, and we feel we have another incredible boxing event on the horizon with this matchup taking place in Arlington on May 8th.”

Saunders is the fourth Briton to face the Mexican star and the second to do so at AT&T Stadium, after Canelo defeated Liam Smith there in September 2016. May 8 will also be the fifth stadium show for Canelo in the Lone Star state having fought twice at the Alamodome in San Antonio and at Minute Maid Park, Home of the Houston Astros.

“It’s an absolute honor to bring this huge event to the AT&T Stadium in Arlington, Texas on May 8,” said Eddie Hearn, Managing Director of Matchroom Sport. “Last year Canelo missed out on his historic Cinco De Mayo fight, and to bring over 60,000 fans together at this iconic stadium this year is a dream come true.

“This fight is the biggest of 2021 so far with Canelo looking to unify the division once more against undefeated two-weight World champion Billy Joe Saunders. We want to thank Jerry Jones, the Dallas Cowboys and AT&T Stadium for their efforts to bring this global event to their stunning facility and we look forward to giving the fans a momentous occasion and a Cinco de Mayo celebration they will never forget.”

“For 2021’s biggest boxing event to date, it’s hard to imagine a better place than AT&T Stadium,” said DAZN EVP Joseph Markowski. “We look forward to delivering a world-class event from this world-class venue to DAZN subscribers across the globe.”

Tickets go on pre-sale on Tuesday March 23 from 10am CT, with tickets starting from just $40 (plus fees. Pre-sale ends at 10pm CT on Thursday March 25, and tickets then go on general sale at 10am CT on Friday March 26 at SeatGeek.com

About AT&T Stadium:
AT&T Stadium is one of the largest, most technologically advanced entertainment venues in the world. Designed by HKS and built by Manhattan Construction, the $1.2 billion stadium features two monumental arches, the world’s largest HDTV video board cluster, an expansive retractable roof and the largest retractable end zone doors in the world. Features of the stadium include seating for 80,000 and expandability for up to 100,000, over 300 luxury suites, club seating on multiple levels and the Dallas Cowboys Pro Shop, open to the public year-round. The stadium is also home to a world-class collection of contemporary art, made up of over 50 pieces from an international array of curated artists displayed on the walls and in the grand public spaces of the venue. In addition to being the Home of the Dallas Cowboys since opening in 2009, the stadium has hosted Super Bowl XLV, the 2010 NBA All Star Game, the 2014 NCAA Men’s Basketball Final Four, the 2015 College Football Playoff National Championship Game and the annual Goodyear Cotton Bowl Classic. The venue has also played host to high school and college football, concerts, championship fights, international soccer matches, and other special events. For more information, go to www.attstadium.com.