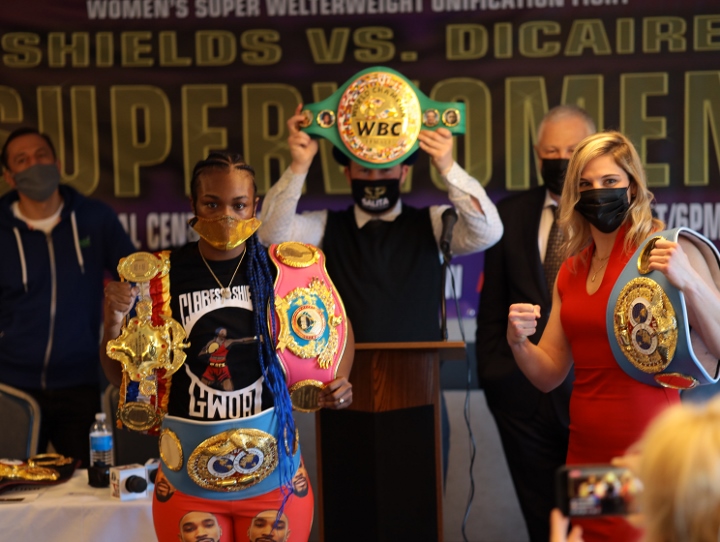 The historic all-women’s boxing event will be livestreamed at 9pm EST | 8pm CST | 6pm PST on FITE.TV and VIVE NETWORK and distributed by InDemand through their existing cable, satellite, and telco providers for just $29.95.

Shields and Dicaire were joined on the press conference stage by event and Shields promoter, Dmitriy Salita, and Dicaire’s promoter Yvon Michel. Here is what they all had to say:

Claressa Shields
I want to thank all my fans who bought the pay-per-view. This a huge moment for me an Marie-Eve Dicaire. I’ve never been off boxing for 13 months ad I’ve never wanted to get back in the ring so much. Training is ok and sparring is cool, but I don’t have the same intensity that I have when it comes to the fight and the belts are on the line and I’m fighting against a whole other country.

To be honest, some of my hardest fights in the amateurs came from girls that were from Canada, even though I was very victorious in those fights. 77-1 in the amateurs. Canada has a strong background in boxing. I’m excited to be in the ring with someone like Marie-Eve Dicaire, who I feel wants to win as much a me and can accept how big this moment is.

Everybody is in for a good fight and this is just a great moment.

Thank you to all my friends and fans who reached out to me. I don’t box for a hobby. It’s not a hobby. It’s my career and I feel like people underestimate me when I speak about how great I am. But if I didn’t say how great I am, no one in this room would have ever called me great because they just don’t recognize it. Only the greats know that they’re great.

I want you to know I’m not taking prisoners. This is a new era for me. My name from now on is Claressa “The Wolf” Shields. T-Rex has long gone. T-Rex was aggressive, but the greatest of all time has so much more. She possesses poise, power and punch placement.

Marie-Eve Dicaire
Honestly, I don’t know with the context we are in right now with the world, if it’s a good thing to be contagious, but I’ll take it as a compliment.

I’m happy and thrilled to here. Like Dmitriy and Yvon said before, it’s been a hell of a year, a year of postponement and disappointment but now it’s finally on. I’m here and I’m enjoying every moment of this adventure. When I became a world champion, I was like is that it? Is there something more? This is when I started focusing on being an undisputed champion.

Facing Claressa Shields is, for me, the opportunity of a lifetime. I worked all my life to get here. My work, my sweat and my blood got me here, so for sure I’m going to be 100% in the ring. I’m looking forward to Friday.

Dmitriy Salita
We specifically, scheduled this event for March 5, on the weekend of international women’s day, so that the best female fight of the year happens at an appropriate time that highlights the work of incredible women around the world.

This fight won’t only be broadcast in the United States. It’ll also be seen in China, Argentina, Panama, Canada, in Africa, Poland, Russia, The Philippines, and several other countries.

This event has been a year in the making. Literally a year ago, we were first supposed to have a press conference to announce this fight and then the pandemic came. The initial date of May 9 was cancelled. Shortly thereafter, we tried to reschedule the fight several times to no fruition. Then in December we decided the best way to do this fight was to do it ourselves on pay-per-view.

Marie-Eve Dicaire could have said no and not taken this fight, but she is a real world champion.

Claressa Shields vs. Marie-Eve Dicaire is truly one of the biggest fights of the year.
Claressa is not only known as ‘The GWOAT’ because she’s the only two-time medalist from the United States. She’s not only known as ‘The GWOAT’ because she’s a multi-time amateur champion, multi-time amateur world champion, multi-time professional world champion, or because she’s the fastest man or woman in the sport to become a three-division champion. She is the GWOAT because she uses her talent of boxing as a tool to grapple with social issues of significance. Claressa understands that her talent is God’s gift, and she is using it in every way possible to push forward important issues in our culture like equality, women’s empowerment and to take the sports world to new level. That’s what March 5 is about.

If Marie is contagious, I want to remind you that they just announced a one-shot vaccine, and her name is Claressa Shields.

Yvon Michel
I can’t believe how thrilled we are to be here today. Thank you to everyone involved.

Thank you to Dmitriy Salita and Mark Taffet. It has been very difficult we know. You had to have a lot of determination to put on this historic event and we have a lot of respect and admiration for you.

We have a lot of respect and admiration for Claressa Shields also, she did everything she had to do to have this event to be a special one for women. One day the women’s fights will be equal to any men’s fight because the quality of the athletes is nothing to be ashamed of compared to men.

I want to apologize for my strong French accent, but I can’t deny my roots and I’m proud of it. I think Claressa probably misunderstood me the other day when I spoke about Roy Jones Jr. I didn’t mean to compared Marie-Eve to Roy Jones’ skill or athleticism or what she has done. My comparison was about her commitment; her dedication and her desire to get better at everything.

You will find about Marie-Eve Dicaire… I was trying to find the words to describe Marie-Eve and I know she’s quick and dedicated and strong. But the best word I found… and forgive me… but she’s contagious. She beautifies everything she touches. She has enthusiasm for everybody who works with her. She can convince the most skeptical to her cause. And in the ring, she can persuade. She always convinces her opponents that she’s the best of the group. Be careful, Claressa, when she touches you in the ring. She’s very contagious.

SUPERWOMEN: SHIELDS VS. DICAIRE is dedicated to this year’s International Women’s Day (Monday, March 8, 2021) and presented by Salita Promotions in association with Groupe Yvon Michel.
# # #

About International Women’s Day
The first National Women’s Day was observed in the United States on February 28, 1909. In 1910, Europe established a Women’s Day to honour the movement for women’s rights and to build support for achieving universal suffrage for women. After World War II, March 8 started to be celebrated in a number of countries. In 1975, during the International Women’s Year, the United Nations began celebrating March 8 as International Women’s Day. In 1995 the Beijing Declaration and Platform for Action, a historic roadmap signed by 189 governments, focused on 12 critical areas of concern; and the inclusion of Goal 5: “Achieve gender equality and empower all women and girls” in the 2030 Agenda for Sustainable Development. This year’s theme of #ChooseToChallenge looks to call out gender bias and inequity and celebrate women’s achievements.

About VIVE Network
VIVE Network is a 4K HDR multi-channel, linear OTT TV network and live event platform as a service for third-party content creators available globally on every screen in every format. As a pioneer of the TV Revolution and UHD Initiative, VIVE Network’s mission is to facilitate the creation, proliferation, and monetization of UHD HDR entertainment to address the domain of the multi-millions of viewers around the globe, and in doing so, establishing the network as the ultimate UHD entertainment destination.

About Salita Promotions
Salita Promotions was founded in 2010 by Dmitriy Salita, a professional boxer and world-title challenger who saw the need for a promotional entity to feature boxing’s best young prospects and established contenders in North America and around the world. Viewers watching fighters on worldwide television networks including Showtime, HBO, ESPN, Spike TV, Universal Sports Network, UFC Fight Pass, DAZN, ESPN+ and MSG have enjoyed Salita Promotions fight action in recent years. We pride ourselves on offering our fighters opportunities inside and outside the ring. Salita Promotions looks forward to continuing to grow and serve the needs of fight fans around the globe.