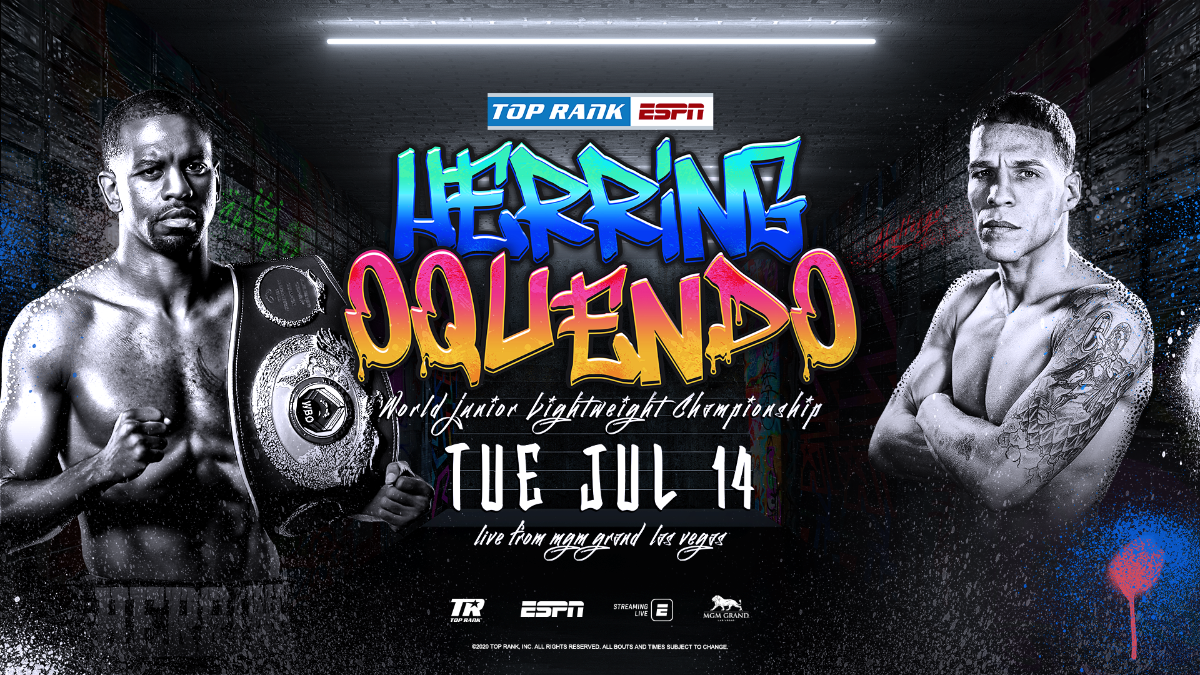 LAS VEGAS (July 7, 2020) — Jamel “Semper Fi” Herring and Mikaela Mayer, both of whom are healthy following recent positive COVID-19 test results that delayed their fights, are primed for their “Bubble” debuts.

The undercard will feature the anticipated “Bubble” encore of “Cassius” Clay Collard, who will fight LT “Smash” Nelson in a six-round middleweight bout. Collard, 3-0 in 2020 (all against previously undefeated fighters), took the “0” from highly decorated prospect David Kaminsky on June 18.

“Jamel and Mikaela wanted to come back as soon as possible, and we were happy to oblige them,” said Top Rank chairman Bob Arum. “They are healthy and ready to put forth tremendous performances.”

Herring (21-2, 10 KOs) makes his 2020 debut following a banner 2019 that saw him upset Masayuki Ito to win the title, and outpoint Lamont Roach Jr. in front of more than 7,000 fans at an outdoor baseball stadium in Fresno, Calif. Herring and Oquendo were set to fight July 2 but Herring’s COVID-19 results delayed the fight 12 days. Herring, the 2012 U.S. Olympic boxing team captain, is 5-0 since inking a multi-fight deal with Top Rank.

Herring said, “I am back, healthy and 100 percent ready to defend my world title. Oquendo is a tough opponent who realizes this is his last chance to win a world title. He’s coming for what I have and I’m not going to cut any corners. I will return home to celebrate with my family and my belt.”

Oquendo (31-6, 19 KOs), from Bayamon, Puerto Rico, challenged Jesus Cuellar for a featherweight world title in December 2015 and is 5-1 since moving up to junior lightweight. He earned the title shot following last November’s shutout decision win over Charles Huerta, which came off the heels of a controversial decision loss to Roach Jr.

Oquendo said, “We know Jamel is a slippery, tall, left-handed fighter who has an advantage in range, but we are working for that and we know that we will have no problems. My company knows how hard I fight and how hard I train. Fans like Jonathan Oquendo because he makes for great fights.”

In less than three years as a professional, Mayer (12-0, 5 KOs) has become one of the faces of female boxing. She closed out her 2019 campaign last October with a sixth-round stoppage over Alejandra Soledad Zamora. The Los Angeles native is on track for a world title shot this year, but she must defeat Joseph (17-4-2, 10 KOs), a native of Lagos, Nigeria, who is coming off a competitive decision loss to former lightweight champion Delfine Persoon.

Mayer said, “After having two fights canceled because of the COVID-19 pandemic, I am relieved and excited to be back and grateful to Top Rank for getting me back on a card so quickly. I’m not the fighter you last saw in October. I’ve had three camps to peak myself and grow as an athlete. A whole new fighter is stepping in that ring on July 14, so I hope Helen is ready.”

Puerto Rican featherweight prospect Luis Melendez (8-1, 6 KOs) will take on Edward “Kid” Vazquez (7-0, 1 KO) in an eight-rounder. Two of Vazquez’s last three wins have come against previously undefeated opponents, while Melendez has won six in a row since the lone defeat of his career.

Colombian puncher Ruben “El Tigrillo” Cervera (11-2, 10 KOs) will fight Clay “3rd Degree” Burns (9-8-2, 4 KOs) in a six-rounder at lightweight. Cervera was stopped by Miguel Marriaga last May, but he returned with a knockout win over Luis Carlos Lugo in October. Burns made a notable “Bubble” impression on June 25, losing an action-filled split decision to Reymond Yanong.