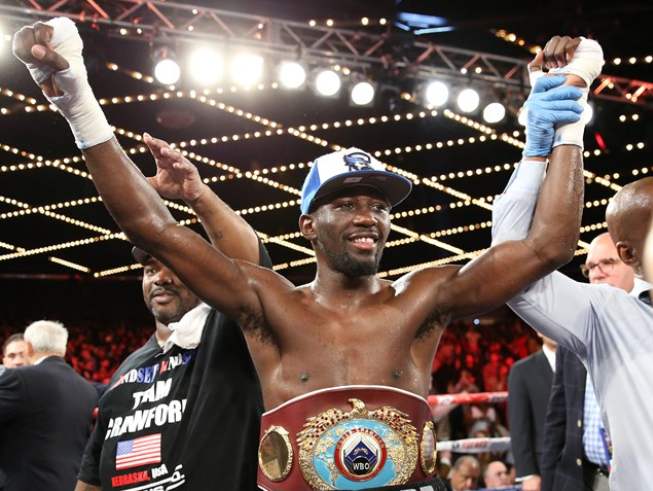 Terence Crawford Returns on June 9th; His Trainer Has a Warning for Jeff Horn.

One of boxing’s very best Terence Crawford returns on June 9th, and his trainer Brian ‘Bomac’ McIntyre has a warning for Jeff Horn.

Crawford challenges Horn for his WBO World Welterweight crown at the MGM Grand in Las Vegas next week, live in the UK and Ireland on BoxNation.

After the fight was pushed back from April when Crawford damaged his right hand, Horn’s trainer Glenn Rushton labelled the American “a princess”, adding “he seems to be a bit soft”.

“The pressure’s on Horn but I don’t give a damn where the pressure’s at because Horn’s still getting his ass whipped,” McIntyre told Fox Sports.

“I’m gonna look right at his coach and say ‘you a*shole’. I tried to tell you that we was gonna win – you been talking all that sh*t, putting all that sh*t in the newspaper – all that sh*t on social media and you didn’t have a clue what you were going up against.

“I think Horn and his coach are scared because they know that Terence Crawford is going to whip Jeff Horn’s butt,” he added.

Crawford is a big favourite with the bookmakers to wrestle away Horn’s belt and become a three-division World Champion, and McIntyre argues that Horn’s aggressive style will play into the challenger’s hands.

McIntyre is fully confident that ‘Bud’ will be victorious in Vegas: “I just can’t wait to shut his coach up and get my hands on that belt!”.