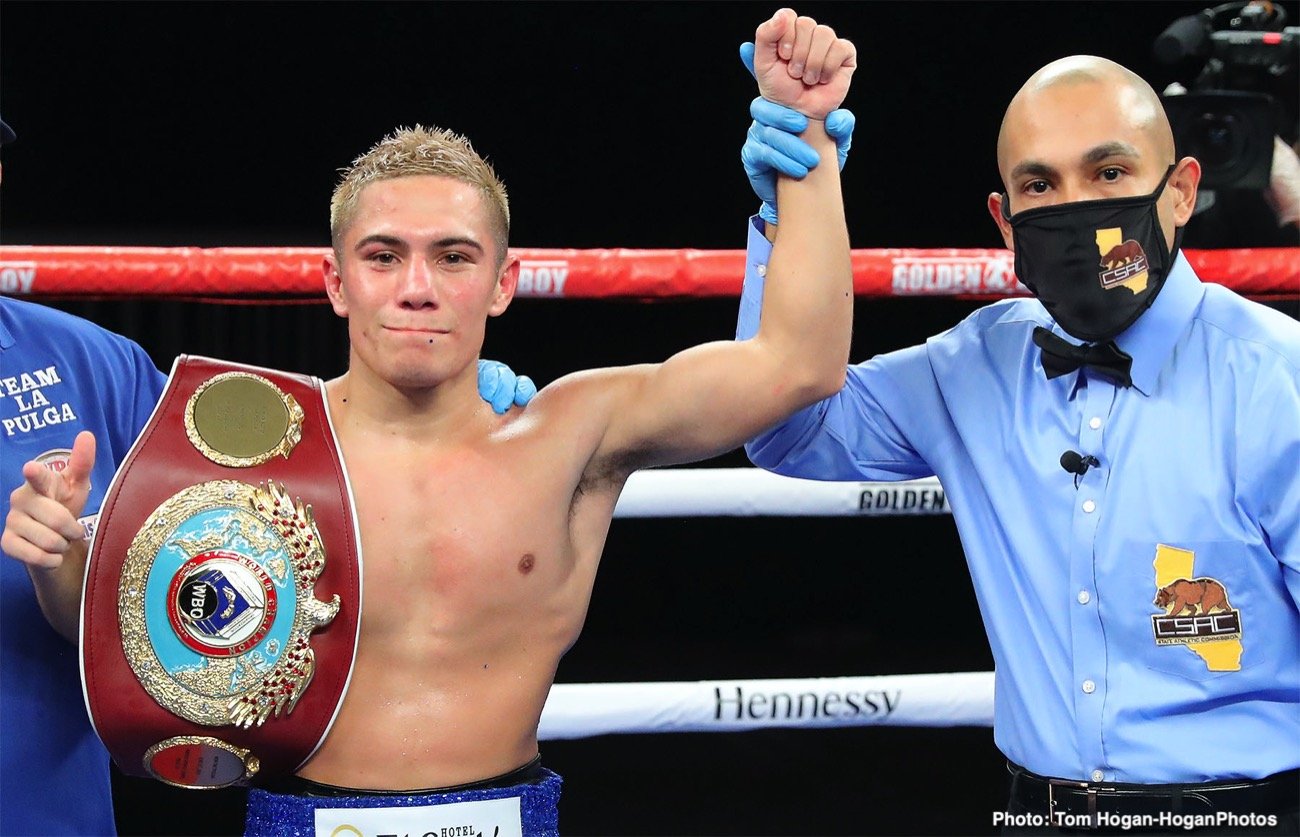 SOTO DEFENDS WBO WORLD TITLE AGAINST TAKAYAMA ON MAY 8

Elwin Soto will defend his WBO Junior-Flyweight World title against Katsunari Takayama as the chief-support bout to the blockbuster Super-Middleweight unification clash between Canelo Alvarez and Billy Joe Saunders on May 8 at AT&T stadium in Arlington, TX, live worldwide on DAZN (except Mexico).

Soto (18-1 12 KOs) fights under the Matchroom banner for the first time on the show having penned a deal with Eddie Hearn last week. The Mexican makes the third defense of the crown he ripped from Angel Acosta in dramatic fashion with a final round KO win in California in June 2019 and has seen off the challenges of Edward Heno in October 2019 and Carlos Butrago last October.

The 24 year old now puts the crown on the line against the seasoned Japanese Takayama (32-8 12 KOs). The five-time Minimumweight champion made his return to professional action in December in Osaka, Japan having left the paid ranks as a World ruler in 2017 to aim for the 2020 Olympics in Tokyo – and now the 37 year old has switched his focus to becoming a two-weight World champion.

Conway (16-1-1 3 KOs) picked up the title with an impressive win over Navid Mansouri at Matchroom’s Fight Camp in Brentwood, Essex in August. Conway and Cissokho (12-0 8 KOs) were due to meet on the undercard of Anthony Joshua’s win over Kubrat Pulev in London in December, but the bout had to be shelved, so Conway took his frustrations out on Macauley McGowan on that card instead, with a shut-out win over ten rounds.

French Olympian Cissokho shrugged off his pain at missing the original fight date on the undercard of his manager Joshua by recording his eighth KO win from 12 outings with a sixth round stoppage of Daniel Echeverria in Dallas in March, setting up a rescheduled clash with Conway that is full of intrigue and importance for their respective careers.

Frank Sanchez (17-0 13 KOs) let his hands go for a seventh round KO win over Julian Fernandez on the undercard of Alvarez’s win over Callum Smith in San Antonio, Texas in December, and the big Cuban Heavyweight will be looking to repeat that feat against Nagy Aguilera (21-10 14 KOs).

Sanchez is ranked at a lofty #6 with the WBO, and the 28 year old Eddy Reynoso charge will be plotting a route to the crunch clashes with his fellow big-hitters, but Aguilera will be planning to give him a tough night and the 34 year old comes into the bout on the back of a 21st career win in November.

Mexican-American talent Marc Castro (2-0 2 KOs) makes it three Canelo undercard appearances from three since making his pro debut on the Canelo-Smith card in Texas. The stellar amateur recorded a third round stoppage that night and followed that with a second round KO in Miami on the Canelo-Yildirim bill – the 21 year old will be looking to shine on the biggest stage once again over eight rounds against an opponent to be named soon.

Castro’s old amateur foe Keyshawn Davis (2-0 2 KOs) made his debut at the Hard Rock Stadium and he appears alongside Castro once again in his third pro outing. The Virginia starlet grabbed a second round win that night over Lester Brown and followed that by forcing Richman Ashelley to retire after four rounds of their battle in Dubai earlier this month, and Davis will face Jose Antonio Meza (6-4 1 KO) over six rounds. It’s a family affair on the night with Keyshawn’s brother Kelvin Davis (1-0 1 KO) fights for the second time in the paid ranks after a second round KO win on his debut in December in Los Angeles, taking on Jan Marsalek (8-2 7 KOs) over six rounds.

Rounding off the undercard, Mexican Welterweight Christian Alan Gomez Duran (19-2-1 17 KOs) is on another Canelo undercard after stopping Angel Hernandez in three rounds in San Antonio in December, and he’ll celebrate Cinco De Mayo weekend over eight rounds against an opponent to be named soon.

“It’s a stacked night of action at the home of the Dallas Cowboys on Cinco De Mayo weekend,” said promoter Eddie Hearn. “Elwin Soto is a great addition to our stable and the Mexican World champion will want to dazzle on the biggest stage against the experienced Takayama.

“The clash between Kieron and Souleymane is a cracker, and I am thrilled for both of them that they get to perform on this stage – there will be some spice there after it was postponed in December and now, they get their hands on each other in Texas.

“Frank always brings the heat and he’ll be eyeing a showstopping KO, and again, Marc and Keyshawn get to shine under the brightest lights – it’s going to be a spectacular night of action, leading to the big one between Canelo and Billy Joe.”