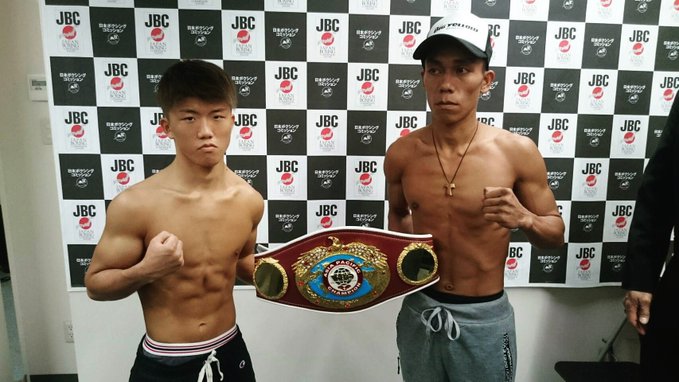 Tomorrow fight fans at the Koakuen Hall, and those using the Paravi service, will get the chance to see super prospect Ginjiro Shigeoka (3-0, 2 KOs) go for a major title in just his 4th professional bout.

The highly touted Japanese fighter will be up against foe Clyde Azarcon (15-2-1, 5) for the WBO Asia Pacific Mini-Flyweight title, and today, ahead of their bout, the two men took part in their weigh in and both men, thankfully, made weight with no issues at all, in fact they were both well under the limit.

Shigeoka, the much, much shorter man, was comfortably under the limit at around 104.7lbs. He looked strong, determined Shigeoka, giving around around 10cm in height, admitted that he though getting a title fight in his 4th bout was early, but that he was happy and seemed confident, stating he was looking for a stoppage in 4 of 5 rounds, with his body attack likely to be a focus.

Interestingly Azarcon was much lighter than Shigeoka, despite being the far taller man. The Filipino, fighting in Japan for the first time, was 103lbs at the weigh in. He looked a bit gaunt, and clearly has a long body to attack, but stated he was in come condition and that he would win for his family.

Sadly for those not able to get to Korakuen Hall or make the most of Paravi, this bout is expected to air in some form next week on TBS.