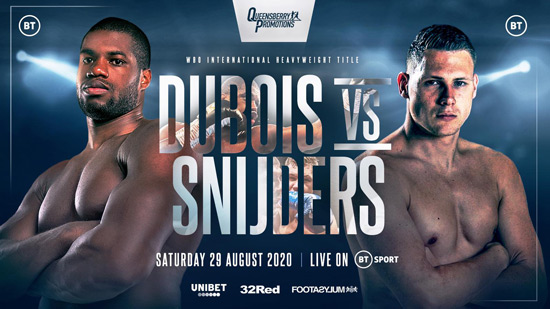 The 22-year-old Dubois (14-0, 13 KOs) went 5-0 with 5 knockouts in 2020, including a fifth-round demolition over the previously unbeaten Nathan Gorman. He won the British and Commonwealth titles to rise to the top of the domestic heavyweight crop and closed out the year last December with a second-round stoppage over Kyotaro Fujimoto. Dubois is well known to ESPN+ viewers, as his last seven bouts have streamed live on the platform. As he awaits a potential showdown with unbeaten countryman Joe Joyce, he must defeat Snijders (18-1, 8 KOs), who has fought all but one of his pro bouts in his home country.

In other streaming action on the Dubois-Snijders card:

WBO European junior welterweight champion Sam Maxwell (13-0, 11 KOs) will make the second defense of his belt in a 10-rounder against Joe Hughes (17-5-1, 7 KOs), a former English and European champion looking to break a two-bout losing skid.