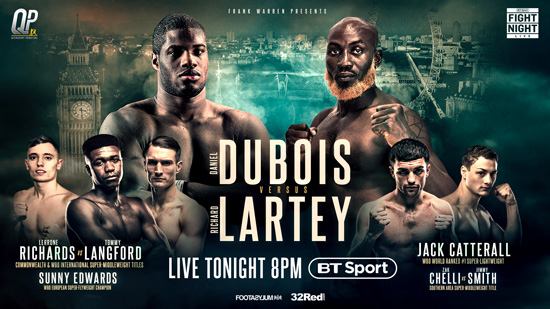 Results from Saturday night’s show at the SSE Arena, Wembley, headlined by Daniel Dubois fighting for the vacant WBO Global heavyweight title against the 14-1 Richard Lartey from Ghana.

Daniel Dubois’ bid to win a fifth title belt in 11 professional fights got off to an explosive start when he entered into a trade-off with his Ghanaian opponent Richard Lartey. The 14-1 Lartey held his own and Dubois needed to remain wary of wild swings.

Respect to Richard Lartey for coming to fight. I learned a lot tonight and now ready to move on to July 13th and whoever @frankwarren_tv wants to put in front of me.

I hope you enjoyed the fight and thank you to everyone supporting it means a lot 👊🏿pic.twitter.com/OT2XTAXY3B

The 21-year-old was bossing proceedings but referee Bob Williams was forced to deal with holding and grappling. Dubois took two heavy shots in the second to demonstrate that he can, indeed, take one on the whiskers. It was the young Londoner, however, who always looked the most potent force.

Dubois looked to have taken the wind out of his opponent with a ripping upper cut to the chest before the pair engaged in a thrilling shootout during which Dubois took a heavy blow. The downside was the holding that disrupted the rhythm of the fight.

Two huge rights from Dubois set the tone in the fourth but it was a brutal left hook that put an end to the heavyweight thrills and spills.

The champion started in a mesmerising fashion, stalking his Portuguese opponent and hitting the mark with an array of snappy shots that left Matos looking bewildered. His nimble footwork wouldn’t look out of place on Strictly and Edwards has clearly got the makings of a gifted performer destined for big things in the ranks of the little men.

Edwards tagged his man with both left and right hooks in the opening knockings of the third round, sparking Matos to respond in kind, only landing on arms, gloves or thin air. Despite being put down for the first time in his last fight, Edwards was happy to get up close and his domination was unrelenting as the halfway point approached.

Matos appeared to be cut around the left eye in the fifth and his face was further bloodied as he refused to take backward steps and was continually forced to taste leather. The sixth played out in much the same fashion, but with Edwards taking to the ropes at one point to lull his opponent in a little closer.

Edwards whipped in devilish hooks from both sides and then ended round seven with a chopping left hook to the jaw of Matos that, had the bell not sounded, you suspect he would have been in big bother.

The pressure was upped by Edwards at the beginning of the eighth and referee Phil Edwards had seen enough.

The first round was a real slow burner as Richards – sporting shorts the colour of a bumble bee – and Langford circled each other with the odd jab extended to keep each other occupied. Langford was showing the more purpose as the second unfolded, but was always wary with Richards being such an accomplished counter puncher.

Lerrone Richards piecing Tommy Langford up in the 10th round 🔥

In control throughout, he looks like a special talent 👊 pic.twitter.com/BPrke4sZv0

Richards, starting to show his fast hands, was content to operate on the back foot and the bolder Langford got, the more success he was enjoying. The New Malden man was dictating the momentum with the flicking of his jab, with Langford only able to disrupt his rhythm by roughing the stylist onto the ropes.

A swift combination rocked Langford temporarily in the fifth and Richards did show some devilment by going downstairs with two hurtful blows in the sixth. The desire to make a fight of it, however, was coming from Langford but the jab and movement of Richards was, more often than not, keeping him at bay with scoring punches few and far between.

The Devonian increased activity to the body in the eighth round and attempted to rattle the composure of the elegant Richards, who never looked likely to get drawn into a shootout. The ninth was a nip and tuck three minutes with both enjoying sporadic success, but which will find favour with the three judges?

Richards finally met fire with fire in the tenth and unleashed a succession of shots that landed on the button, including a head-rocking uppercut, which Langford occasionally looked vulnerable to.

A Langford right hook that landed flush was responded to with some shuffling showboating from Richards, who was showing no signs of physical decline in the championship rounds. He appeared to be saving his best for last and employed an aggression that was missing in the earlier rounds.

It was Langford’s turn to go on the retreat towards the end of the 11th and it was Richards in authority throughout the 12th.