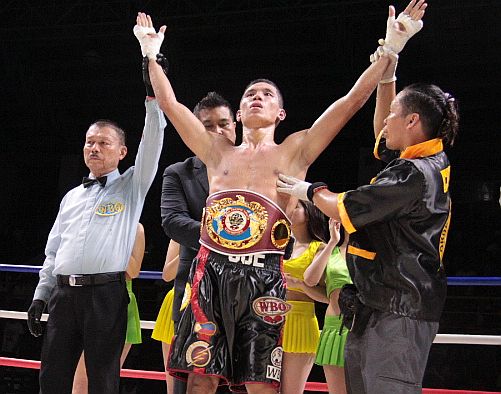 Filipino sharpshooter Joe Noynay (18-2-1, 7 KOs), 129.75, impressively kept his WBO Asia Pacific 130-pound belt as he battered previously unbeaten 2012 Olympic bronze medalist Satoshi Shimizu (8-1, 8 KOs), 129.75, from the outset, dropped him twice in the first round, kept whipping the damaged Japanese and finally halted him at 2:18 of the sixth round in a scheduled twelve rounder on Friday in Osaka, Japan.

It took place beneath the WBA middleweight title bout of Rob Brant and Ryota Murata at the Edion Arena Osaka, where people gloomily witnessed an unexpected massacre. It had been regarded as Shimizu’s step en route to his world title crack in the near future, but Noynay was such a great nuisance that he completely destroyed his dream. The fatal sixth saw Shimizu, probably due to his deteriorated eyesight, abruptly quit by himself to be declared a TKO loser. It was a shocking scene.

Via By Joe Koizumi / fightnews.com