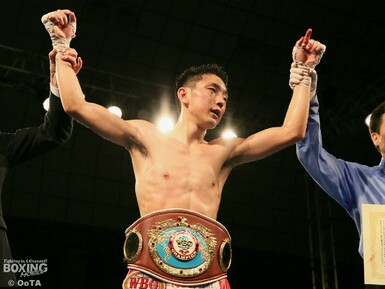 The bout was a rematch of their 2018 contest, which saw Mori claim the title on the back of a technical decision. Thankfully this time around there was no early conclusion due to a clash of heads, though like their first bout, it was razor close, and the judges were split on the winner, with Mori taking the narrow win.

It was the challenger who got off to a great start, winning the first 2 rounds on all 3 cards, and the third round on the couple of the cards. That great start was down to Pumicpic landing his straight right hand and setting the tempo of the bout. Despite the success of Pumicpic, he was forced to take some body shots, and his movement, which had been key in the opening stages, began to slow in round 4. That is where Mori began his charge back in to the fight, taking rounds 4 and 5 to battle his way back into the bout.

Pumicpic refused to roll over though and upped his own tempo in round 6, landing his right hand with worry regularity. That forced Mori to change his gameplan, using his speed and range to fight at range. That proved to be a huge tactical decision that paid dividends with Mori taking rounds 9 and 10 before the two men clashed in center ring and warred, in a thrilling 10th round.

Mori’s effort in round 10 took a lot out of him, and Pumicpic would take round 11, though Mori had a great bounce back round in the 12, and final, round, doing enough to take the round.

After 12 rounds the judges turned in scores of 115-113, twice, to Mori and 116-112 to Pumicpic, giving Mori a split decision win to retain the title. This was the toughest bout of his career, but he dug deep and took home the win. Pumicpic will feel disappointed to have not picked up the win, but few can fault his effort, and he will certainly be welcomed back in Japan to fight in the future, as he has once again tested the local and put in an excellent performance.