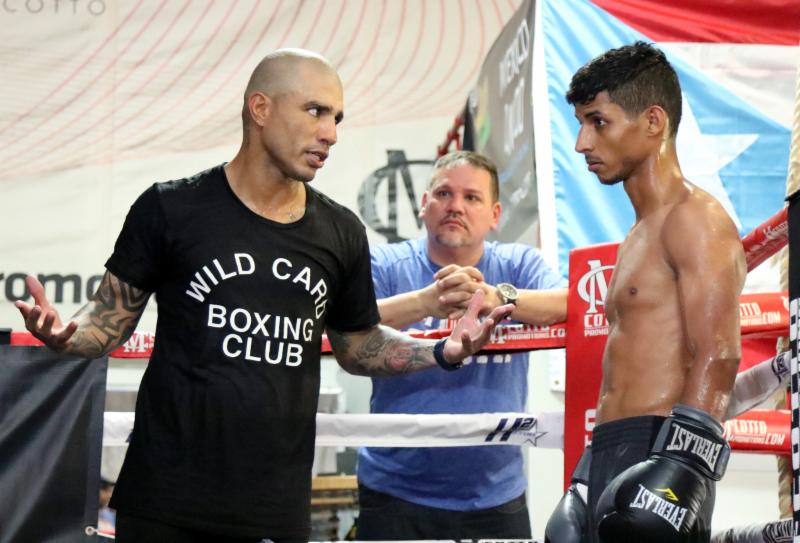 CAGUAS, PUERTO RICO – All help is good in the face of a first world title defense of the world championship, especially if it comes from the hands of someone with the wealth of experience from former four divisions world champion, Miguel Cotto.

And that is the case of the WBO Jr. flyweight champion, Ángel ‘Tito’ Acosta, who has several sessions of individual work with Cotto to complement that with his coaches in the face of his championship fight on June 16 in the Coliseo de Puerto Rico against the dangerous Nicaraguan Carlos Buitrago as part of a card presented by Miguel Cotto Promotions and H2 Entertainment and which will be televised by DIRECTV Puerto Rico as part of his series ‘Night of Champions’.

Acosta had his most recent encounter with Cotto on Wednesday afternoon in Caguas, where he was seen working certain combinations and displacements that Cotto used to use effectively.

One of them included the use of two consecutive jabs to open the guard, a small displacement to then connect a straight shot and then enter with two powerful hooks before moving again outside the area of exchanges.

“He’s taught me the technique, how to put solid punches. Anyone who stands in front of me, hit him hard. “(Also a) be more aggressive, use the skill, push the boxer, do many things.”, said Acosta (17-1 with 17 knockouts), who is already putting into practice what was taught by Cotto during his preparation.

“Now (Cotto) is well stuck (helping me). He has time to attend me and his boxers. It has helped me a lot. Yesterday I learned a lot from him. On Monday I also did couple of techniques and (later) I was able to do them in sparring. We already have the fight strategy”.

Acosta has aspirations to convert Buitrago (30-3-1 with 17 knockouts) in his eighteenth victim by way of the knockout but he knows that the Nicaraguan will be elusive, so he intends to make the most of the occasions in which the Central American fighter decide to ‘raffle’ in the ‘give and take’.

“He has good boxing, he’s coming to box me, to keep me from hitting him. That’s why I’m smart. The knockout comes alone. But if I see that I can knock him out quickly, I knock him out, ” Acosta said, adding that Buitrago will leave Puerto Rico without achieving his dream of being a world champion.

“He says he’s not going to touch the canvas. But on June 16 he will touch his dream. He will achieve his dream by touching the canvas. ”

For his part, Cotto expressed satisfaction to work with Acosta, although he ruled out dedicating himself fully to the facet of being a boxing trainer.

“Tito is a hard-working, humble, neighborhood boy. The only thing that is done is to help in the best possible way. He has confidence in me and I know he will do the best he can in the fight. In the way that he can trust me, we will continue working in the same way, “said Cotto, adding that whenever he has time, he will do everything possible to share his vast knowledge in pugilism with the boxers he represents and who are coming up .

“This is something spontaneous, (which is given) every time there is an opportunity. It’s not in my north to train (full-time fighters). ”

Integrated Sports Media will distribute La Batalla: Acosta vs. Buitrago in the United States by cable, satellite under the Pay Per View system in digital through iN Demand, Vubiquity, DIRECTV, DISH and live broadcast worldwide (excluding Puerto Rico) in the FITE Application and website. TV (www.fite.tv), from 9 p. M. ET / 6 p.m. PT, for a price of only $ 34.95.