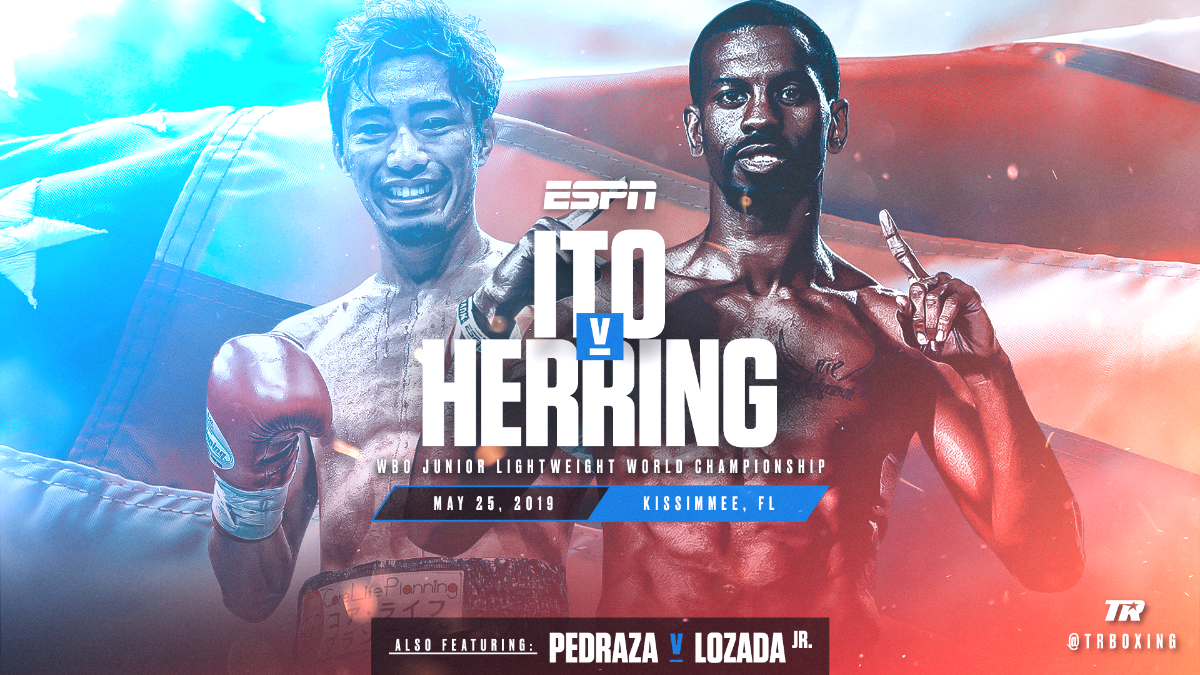 Promoted by Top Rank, in association with All Star Boxing and Teiken Promotions, tickets to this world championship event go on sale Friday, April 26 at 10 a.m. ET. Priced at $100 (ringside) and $50 (general admission), including all taxes and facility fees, tickets may be purchased online via ticketmaster.com, charge by phone at 800.745.3000 or in person Osceola Heritage Park box office (open Monday-Friday from 10 a.m. — 4 p.m. and on event days). For more information: www.ohpark.com.

“I am excited to return to the United States to defend my world title,” Ito said. “I will be at my best, as I know Herring is a tough and experienced fighter. While I ultimately want to unify the 130-pound division, Herring is the task at hand. There is no sense in talking about the future until I take care of business on May 25.”

“I need to thank my management team and Top Rank for this opportunity,” Herring said. “Not only is this fight landing on Memorial Day weekend, but May 25 would’ve been my daughter Ariyanah’s 10th birthday. She passed away from sudden infant death syndrome, and I am dedicating this fight to her.

“I have tremendous respect for Ito, but I plan on being his most difficult challenge. I don’t want to release too much of the game plan, but I won’t be bullied like his last two opponents once the bell rings.”

Ito (25-1-1, 13 KOs) claimed the vacant WBO junior lightweight title with an upset decision win over Christopher “Pitufo” Diaz at the Kissimmee Civic Center. The Diaz fight marked Ito’s United States debut and the first time he’d fought away from his native Japan. He returned home for his first title defense on Dec. 30, scoring a seventh-round TKO over Evgeny Chuprakov.

Herring (19-2, 10 KOs), who served two tours of duty in Iraq as a field electrician, turned pro in December 2012 and won the first 15 bouts of his career. He lost a pair of fights as a lightweight, including a razor-thin decision to Ladarius Miler in August 2017. Following the Miller defeat, Herring signed on with Top Rank, hired trainer/manager Brian McIntyre and moved down to 130 pounds. Since then, he is 3-0, including an ESPN-televised decision victory over John Vincent Moralde last September on the Jose Ramirez-Antonio Orozco card in Fresno, California. In his last bout, Dec. 14 in Corpus Christi, Texas, he notched a clear points decision over Adeilson Dos Santos.

Pedraza (25-2, 12 KOs) won the IBF junior lightweight title in 2015 and made a pair of title defenses. Following a 2017 TKO loss to Gervonta Davis, he moved up to the lightweight division. In his third bout at lightweight, he won a unanimous decision over Ray Beltran to claim the WBO title. Less than four months later, he faced off against WBA champion Vasiliy Lomachenko to unify world titles. He was competitive, but Lomachenko scored a pair of 11th-round knockdowns to secure the unanimous decision. Lozada (40-2-1, 34 KOs) burst onto the world stage last March, knocking out highly touted prospect Felix Verdejo in the 10th and final round. Since then, he is 1-0-1, including a disputed draw versus Hector Ambriz.

“I feel very happy because on May 25 I will be fighting in a big world championship event where I will be facing a great Mexican warrior like Antonio ‘Cañitas’ Lozada in front of my people in Kissimmee,” Pedraza said. “I know I will get all that affection and support of all the Puerto Rican fans. They can’t miss this great card. I want them to enjoy it and leave the venue happy.

“I’m more than ready to get back in the picture for a world championship opportunity.”

The entire undercard will stream live in the United States exclusively on ESPN+ starting at 6:30 p.m. ET/3:30 p.m. PT and will showcase a host of prospects in competitive matchups.

Jeyvier Cintron (10-0, 5 KOs), one of the sport’s fastest-rising 115-pound prospects, will face his toughest test to date against former interim flyweight world champion and one-time super flyweight world title challenger Koki Eto (24-4-1, 19 KOs) in a 10-rounder. Cintron represented his native Puerto Rico at the 2012 and 2016 Olympics, becoming the first two-time boxing Olympian in his nation’s history.

NABO junior welterweight champion Yomar “The Magic” Alamo (16-0, 12 KOs) will defend his belt in a 10-rounder against an opponent to be determined.

Use the hashtag #ItoHerring to join the conversation on social media.

About ESPN+
ESPN+ is the multi-sport, direct-to-consumer video service from The Walt Disney Company’s Direct-to-Consumer and International (DTCI) segment and ESPN. It reached 2 million subscribers in less than a year and offers fans thousands of live events, on-demand content and original programming not available on ESPN’s linear TV or digital networks, along with premium editorial content.

ESPN+ is available as an integrated part of the ESPN App (on mobile and connected devices) and ESPN.com. They are the industry-leading all-in-one digital sports platform, delivering a rich, personalized experience to tens of millions of fans every month.