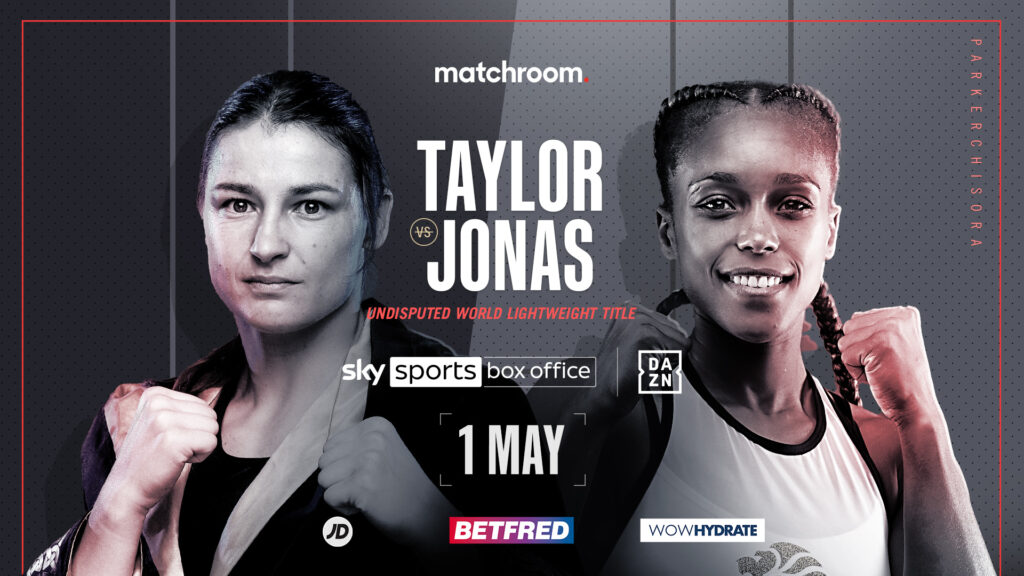 Irish star Katie Taylor defend her Undisputed WBO Lightweight crown against former amateur rival Natasha Jonas on May 1 card part of a packed card that also features Derek Chisora taking on Joseph Parker. Both fights will be live on Sky Sports Box Office in the UK and on DAZN in all markets excluding the UK, Ireland, China, New Zealand and Samoa.

Taylor (17-0, 6 KOs) defeated Jonas (9-1-1, 7 KOs) in the quarter-final stages of the London 2012 Olympic Games on route to capturing Ireland’s first gold medal of the summer. The pair will meet again nearly ten years down the line with Taylor’s WBC, WBA, IBF, WBO and Ring Magazine Lightweight World Titles on the line.

Since their first meeting in the amateurs, Taylor has gone on to cement herself as the best female fighter on the planet by winning World Titles in the Lightweight and Super-Lightweight divisions and remaining undefeated in all 17 of her professional contests. ‘KT’ was last seen outclassing her WBA Mandatory Challenger Miriam Gutierrez with a masterful display in November.

‘Miss GB’ came agonisingly close to winning her first World Title at the age of 36 last summer when she battled to a thrilling draw with WBC and IBO Super-Featherweight Champion Terri Harper at Matchroom Fight Camp. It was the first time that two British women had competed against each other for a Word Title, and the all-action fight more than lived up to the occasion.

“Natasha proved in her last fight that she is still performing at the highest level so it’s a great challenge for me and I’m really looking forward to it,” said Taylor. “It’s a fight that people have been asking for and those are the type of fights you want to be part of.

“People still talk about our fight in the 2012 Olympics and I think that proved to be a real eye opener for people in terms of what women’s boxing is all about. I’m expecting another tough fight on May 1st and I’m looking forward to successfully defending my Titles.”

“I’m really excited about getting the fight, I made a lot of noise about not wanting to go down in level or class after establishing myself on the world stage in my last fight,” said Jonas. “I know Katie is a different type of animal to Terri Harper, but I believe every time I’m asked to step up, I do. I said I wanted to be a champion and anybody at 130 to 140 was in my sights, I know I’m a world class boxer and I can win a World Title.

“From the minute Eddie signed me this fight has been on the cards. Me and Katie had a great story from the Olympics, and we have both been pioneers in our own way. I’m glad that it’s happening and it’s a great fight for women’s boxing and for British and Irish boxing.”