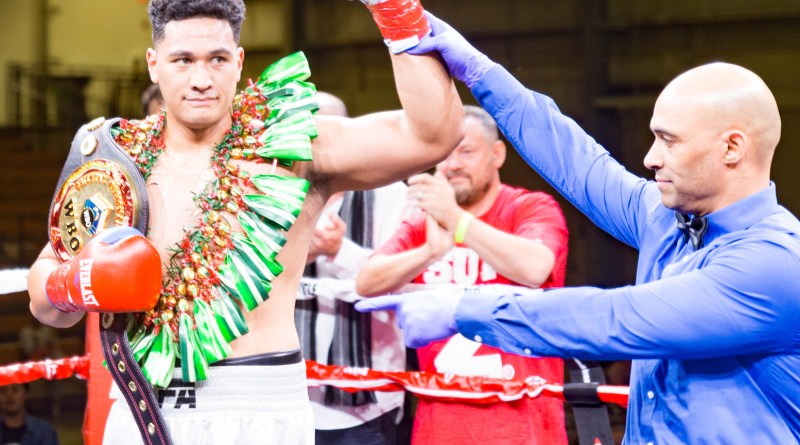 COLUMBUS, OH – DiBella Entertainment’s special edition of its Broadway Boxing series, held in Columbus, Ohio in a partnership with Team Tory Promotions, delivered big-time action to fans, culminating in an evening with several displays of raw power that underscored the event’s inclusion in the Arnold Sports Festival weekend.

New Zealand’s undefeated Junior Fa, the World Boxing Organization’s No. 8-ranked Heavyweight, lived up to his billing with a relatively trouble-free first round knockout of former French heavyweight champion Newfel Ouatah. Fa represented the major draw of the night, but several prospects took full advantage of their spot on the card, providing their supporters with career-advancing performances.

After the opening bell, Fa (17-0, 10 KOs) quickly engaged Ouatah (16-3, 9 KOs), as he made his way nearly across the entire ring in a couple of steps, with a level of agility that belied the New Zealander’s 254-pound, 6-foot 5-inch frame. Apparently he saw the reaction he needed to see in the 33-year old Ouatah. Fa’s quickness and pressure never allowed Ouatah find any rhythm or establish a range where he could comfortably fend off the early rush of the 29-year old. Fa closed the distance at his discretion with very little resistance, making his way inside to get off combinations that resulted in four knockdowns before the referee decided to halt the action.

Fa defended the Interim WBO’s Oriental title , but the promising prospect will need to be tested by better opposition prior to facing one of the veteran contenders in boxing’s grandest division.