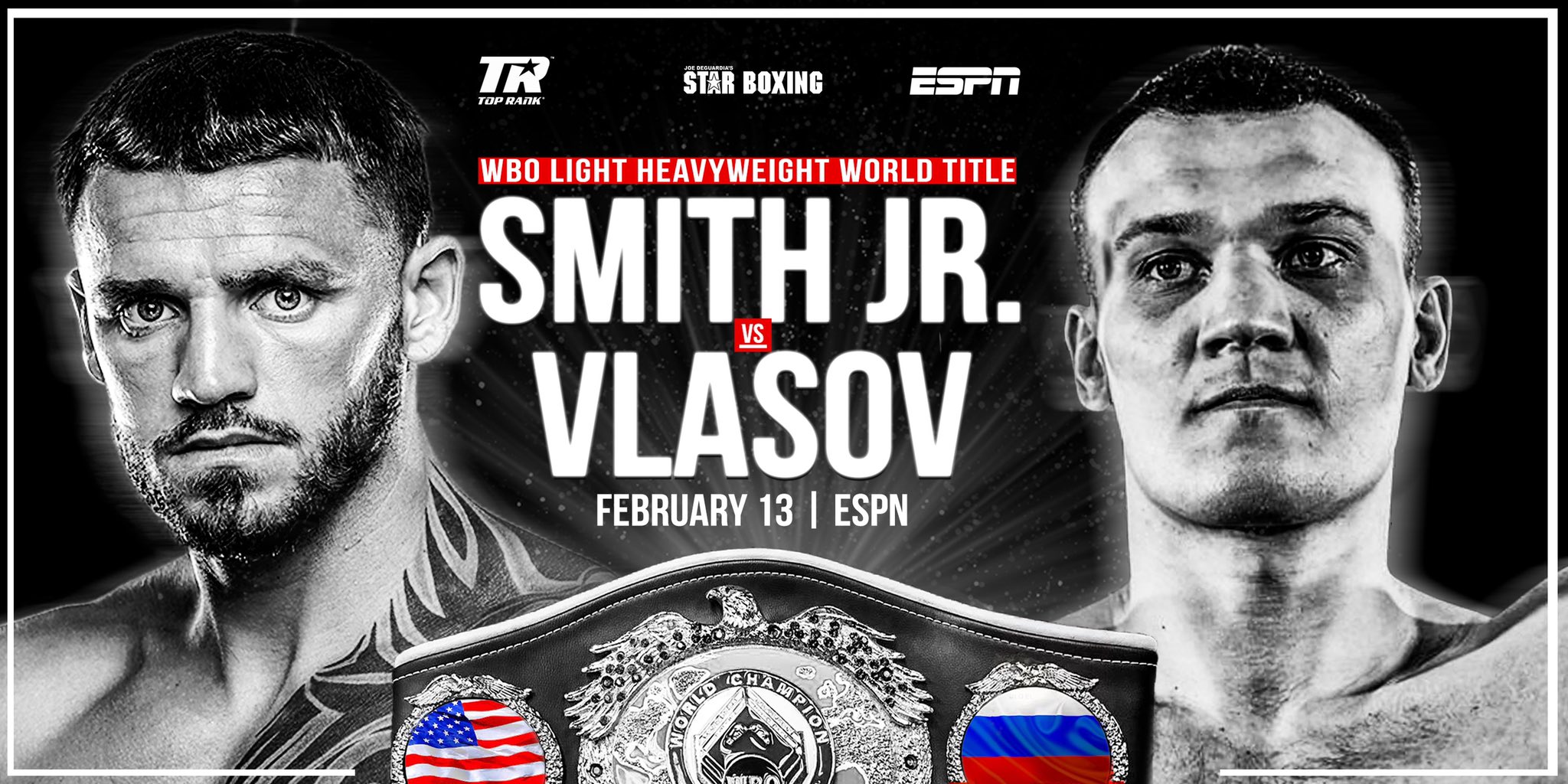 If it weren’t reality, some would say it was scripted. An American union laborer’s rise to the top of the boxing world, in the paramount bout of his career for the Championship of the World, against a big strong Russian bear.

Smith Jr. had a 2020 reminiscent of his remarkable 2016. In both years, Smith Jr. secured two major upsets, placing himself inside the top 5 in the light heavyweight division and on track to fight for a world title.

As a relative unknown in 2016, and a 16-1 underdog on NBC, Smith Jr. traveled to Chicago to win a devastating first-round knockout of then #2 rated, Andrezj Fonfara in what would be dubbed “Upset of the Year” by Ring Magazine.

Later that year, once again as an underdog, Smith Jr. would knock boxing legend Bernard Hopkins, clear out of the ring, onto the Forum floor, becoming the first to knock out the former multi-division world champion.

Both knockouts were also runners-up for Knockout of the Year. With a win over the likes of Fonfara and Hopkins in back-to-back fights, Smith Jr. became a well-regarded and beloved inspiration in the light heavyweight division.

Fast forward to 2020, and Smith Jr. would once again find himself clawing back into the mix of a hot light heavyweight division. In January, Smith Jr. was in the main event on ESPN from the Hard Rock in Atlantic City, where he soundly defeated then #1 rated light heavyweight, and heavily favored Jesse Hart for the WBO NABO Light Heavyweight Title.

Next, Smith Jr. laced up his boots and found himself again as the underdog in a four-man WBO World Title elimination tournament against then #1 rated and former world champion, Elieder Alvarez.

After dominating the fight, Smith Jr. knocked Alvarez through the ropes in the ninth round, eerily similar to his Bernard Hopkins knockout, four years prior, en route to a 9th round brutal TKO victory.

However, after this semifinal bout was postponed once due to the global pandemic, again in October, and then the rescheduled November bout was also postponed when Salamov tested positive for COVID-19, Star Boxing’s NY Hall of Fame Promoter, JOE DEGUARDIA, requested and was granted the right for Smith Jr. to take on Maxim Vlasov for the vacant WBO World Title.

Vlasov, who had a twelve-fight win streak snapped by Krzyzsztof Glowacki in a bout for the Cruiserweight World Championship in November 2018, has since won three-in-a-row in which he collected the WBO Global Light Heavyweight Title.

Smith Jr. now finds himself as the main character in a Rocky story, founded in reality. Just four years ago, as a member of Union Laborer’s Local 66, Smith Jr. could be found at the Bay Park Sewage Plant with RJ Industries, power washing fecal matter off of tanks.

To this day, Smith Jr. keeps his books up to date with the union, and while not fighting, can be found around Long Island servicing trees with his Dad, for their company, “Team Smith Tree Service.”

Originating from humble beginnings, with a roll up your sleeves style of hard work, Smith Jr.’s grit and determination to make something of himself has led him one victory away from glory and has made him the pride of the working class, known affectionately as the “Common Man.”

Joe Smith Jr. started his pro career with brothers Jerry and Phil Capobianco. “Running into Jerry (trainer) and Phil (manager) changed my life. Without them, I wouldn’t have made it to where I am today.

I would still be a gym fighter.” SMITH JR. continued, “and a huge thank you to Joe DeGuardia and Star Boxing, my promoter, who took me to the Paramount and world and providing me with this great opportunity and believing in me. I am ready for this fight, and I can’t wait”.

Star Boxing CEO, JOE DEGUARDIA, said this about the upcoming World Title fight, “Joe Smith Jr. is one of the hardest working men in boxing.

He is the optime of the working-class hero. It is truly a different experience watching Joe fight – he has hammers in both fists, and at a moment’s notice, can end a fight.

He has vastly improved his boxing ability, and I believe he has become the top guy in the division. I am very confident that the ‘Common Man,’ Joe Smith Jr., will be the World Champion. Kudos to the WBO for recognizing Joe’s talents and mandating this fight.”