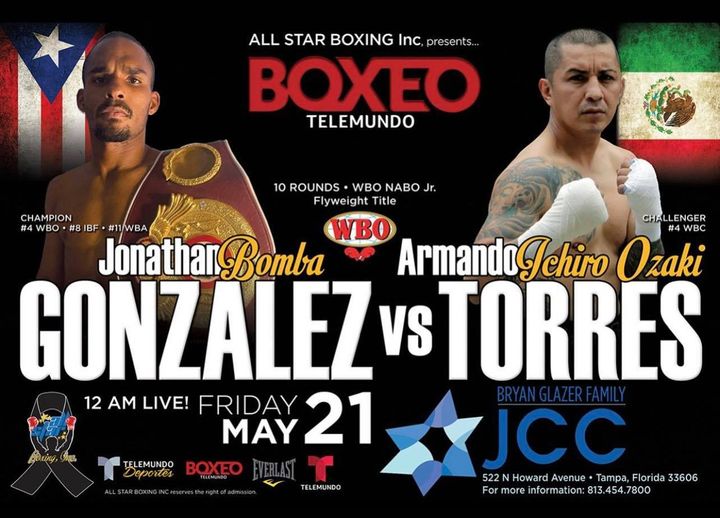 Boxeo Telemundo’s Spring Series Finale will close with a Triple Crown title bill which will be headlined by WBO #4 IBF #5 WBA #12 Jonathan “Bomba” Gonzalez (23-3-1) of Cauguas, Puerto Rico defends his WBO/NABO Jr flyweight title against WBO #15 WBC #3 Armando “Ichiro Ozeki” Torres (26-18) of Mexico City, Mexico in a 10 round affair. The bout continues the traditional rivalry of Mexico against Puerto Rico as the winner between these two highly ranked contenders will be in line for a shot at the world title.

“We are delighted to close our spring series with a terrific triple crown bill” stated Felix “Tutico” Zabala President of All Star Boxing, Inc “The main event is an excellent fight featuring two highly ranked contenders with all the marbles on the line” Zabala Closed “Friday nights show will deliver fireworks for the fans”

The evening’s second title fight will feature a battle of unbeaten as Otar Eranosyan (7-0 5 KO’s) of Akhalkalaki, Georgia but residing in Miami Beach, FL will face Jose Argel (8-0 2 KO’s) of Iquique, Chile in a 10 round bout for the vacant WBA Continental Americas super featherweight title. Otar, has made 3 appearances on Telemundo, but will now step up his competition in search for a spot in the world rankings.

The third title fight comes in the hands of undefeated super welterweight contender Mekhrubon Sanginov(10-0-1 7 KO’s) of Dushanbe, Tajikistan will square off against Andres “Pitufo” Viera(10-2 8 KO’s) of Montevideo, Uruguay in a 10 round bout for the vacant WBA Continental Americas Super Welterweight title.

Rounding off the undercard action, former amateur standout Bryan “The Hunter” Polaco(4-0 3 KO’s) of Fajardo, Puerto Rico will face an opponent to be determined over 4 rounds. Polaco signed with All Star Boxing, Inc after the cancelation of the 2020 Tokyo Olympic games, where he was able to fast track his career into the paid ranks.

“I am happy to be back in the ring” stated a relaxed Bryan Polaco “ In a year of the pandemic where much was lost, I was able to advance my career. 2021 will be a big year for me, we are ready for the big challenges.”